The other day I saw a tweet from Kris Howard, she was enraged that Maker culture excluded lots of crafters. This got me thinking about the definitions of maker and crafter as I’ve never really thought of myself as a crafter but have recently thought myself to be a maker. 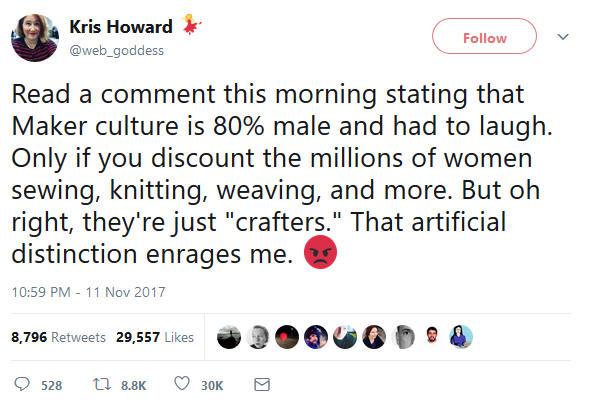 With some help from Kris and Jessica Carew Kraft the origional statistic was tracked down to a Make magazine survey from 2012. I think that statistic is a flawed in that it’s more about who subscribes to magazines than who is a maker. The same survey mentioned that a lot of those subscribers are into electronics and computing which is also not surprising given the magazine content. So really that statistic is of little help when we are defining makers.

I have showcased many makers on this blog and interviewed several of them such as Carley Fererra, “The Kuriologist”, Frederick Vandenbosch and Gina Kamentsky. Makers do come from a diverse range of backgrounds which I think shows that the origional commenter really did not know what they were talking about.

I also don’t agree with the “just crafters” sentiment, as many of Kris’ followers commented crafts require a whole range of skill such computation, manual dexterity, spacial visualisation, planning and undertanding the properties of the materials you work with.

If craft and making are the same thing, do we still need the term “making”?

Only had a handful of people disagree today that “making” is just rebadged crafting.

Daniel from CrowStudio added a dictionary defintion of craft to the discussion.

noun. an activity involving skill in making things by hand.

verb. exercise skill in making (an object), typically by hand.

We’ve seen before when I was looking at top makers that not everyone’s definition of maker is the same. So, I’ve taken a definition from Dr Lucy Rogers of Robot wars and the Makers Guild who has a simple definition of a maker. This would suggest a definition of making is, “Creation of physical items using imagination and skills”

This does suggest that all craft is making but does it mean that all making is craft?

I would say that is not.

There’s two key points in that definition of craft, “skill” and “by hand”.

Looking at this first point, when we think of crafts people people with specialist skill. We think of masters, apprentices, long learning periods, secrets passed down between the generations.  Makers on the other hand are often “jacks of all trades” and have low skill across many topic areas. They are keen to learn and are often showcase their part finished items so that others can learn or provide input.

Taking examples from the #Makevember, these were “makes” that had to be done in less than a day. They were not particularly detailed or skillfull but they were all packed with imagination and many were people trying out new skills as that was one of the ideas behind Makevember.

With regards to the “by hand” definition on craft, I think that’s also where making is different. For making there is no requirement on how you make things. If you want to use an axe, sewing needle or hammer, that’s fine. If you want to get a CNC router, 3D printer or laser cutter to do the making, then that’s fine too.

For me the definition of craft excludes lots of things such as electronics, coding, using machines to make things. In the UK this has likely been re-enforced by the likes of William Morris and the Arts and Crafts movement and going back further the Ludites.

I jokingly suggested a “Ludite Test” that could be used to determine if something was making. If a hypothetical ludite would not smash your item then it’s craft otherwise it’s a make.

Another definition of “Craft” is that it is a visual art. This made me wonder if that meant that the appearance of was important. And hence do things that are solely utilitarian still count? Perhaps making tools, jigs, fixtures which both makers and crafters do is something that’s not actually craft.  Is my scrappy little TIG torch holder here “crafted” or just “made” ? 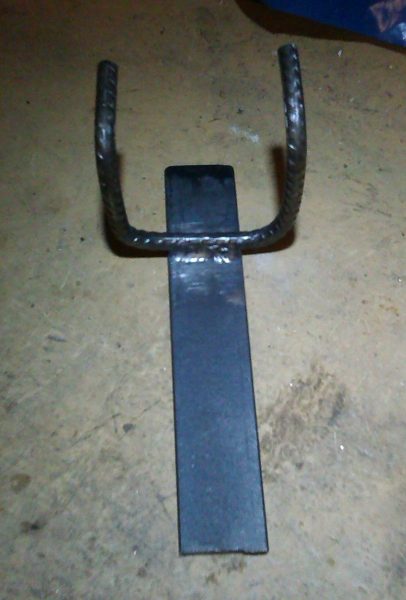 Is Making more than just making?

I also got thinking about if making is more than just the physical act of creation. There are some “Maker Manifestos” about and here’s one from Maker Faire Africa. 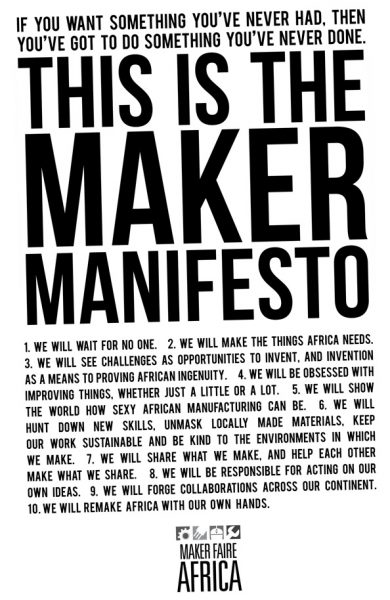 I’ve mentioned “learning” above and as this manifesto mentions there’s also “Collaboration” and “Sharing and Helping”. Now obviously these are not exclusive to one group and I’m certain that crafters do this loads too. So perhaps these don’t distinguish making from crafting. Is it still making if you don’t share? I’d argue that it was.

I was chatting with my wife about making vs crafting and I suggested that crafting is about following the rules, e.g. ten rules for finish carpentry and making really does not care about this, it is about combining things in combinations that people would not have thought about, that “Imagination” that Dr Lucy talks about in her definition. For example Kris herself is definately a maker (even if she hates that term), look at her excellent examples of kniting with encoded messages or combining knitting with electronics.

For me makers are like the master builders Wyldstyle and Emmet in the Lego Movie. They don’t follow the instructions but they see the parts they have available to them and through their imaginations put them together in wonderous combinations.

I think we should celebrate making as being something different to crafting. There is a need for both and both can co-exist, people can interchange between each of them and learn from the others way of creating.

One thought on “Maker <> Crafter”