A mantel clock with the numbers in Topsy Turvy locations. This project is a mixture of mechanics, electronics and embedded firmware. It won a prize in the Maplin Arduino competition.

There have been some questions about the Topsy Turvy Clock that I’ve entered in the SimplyAVR Design Contest Why?This is the question that I get asked the most and it shows the people who really know me vs those who 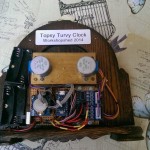 Late last year I was watching a kids TV show and spotted a rather unusual clock, it was a simple mantel clock but the numbers were in topsy turvy locations. I wondered if I could make such a clock and It’s been quite some time since I last looked at the RTC module for the Topsy Turvy Clock. I’ve found a suitable rechargeable battery but until now I’ve been focusing on the motors and mechanisms. When I tried to get The initial design for the Topsy Turvy Clock had all of the circuits being driven through the regulator on the microcontroller. This is a MIC5219 regulator and is rated at 500mA but also has a very low dropout voltage. The For the software of the Topsy Turvy Clock the natural choice was to use the loader and tools provided by Arduino. This meant the coding would be in C++. It’s been a long time since I last used this language 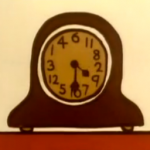 To make the new numbers for the clock I considered a few options. Firstly I thought about simply chopping up the existing numbers and resoldering them in the new positions. The problem with this is that the numbers have been

The final piece of mechanical engineering on the clock was the spindles. As previously mentioned I had a couple of different ideas on how these might work. I went with something roughtly like my second spindle design and that’s worked