The purpose of the MCB (miniature circuit breaker) is to turn off the power to a circuit when the current limit is exceeded. The reasons to do this are to stop the wires or appliances setting on fire when there is a short circuit or overload. The short could be caused by a person touching the live circuit in which case we’d want the circuit to shut off pretty dammed quickly.

In the workshop environment the most cause of an overcurrent situation is when the lathe or drill stalls on something, this causes the motor to draw significantly more current. But it could also be when you hacksaw through the a live cable because it was hiding under your work piece (a good reason to have a tidy workshop).

Anyway, to summarise what I’m saying, it’s a good idea to have MCB’s connecting up the power in the workshop. For a similar reason a RCD is also a good idea, see article on workshop electrics. 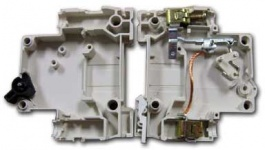 The IET brought to my attention that there are some counterfeit circuit breakers. These are just shells from MCBs with a shank of copper wire where the circuit should be, the modern equivalent of a nail across the fuse. It should be theoretically possible to spot them because they will be lighter than the real ones but if you are not used to handling the real ones then it could be easy to mistake them.

So if someone offers you some cheap MCBs in the pub carpark then it could save your life to “just say no!”