The Enchanted Cottage was built for the Element14 Enchanted Objects Design Challenge. A weather house was stripped down and fitted microcontroller, WiFi, 3D printed mechanism, fibre optics and an RGB LED. 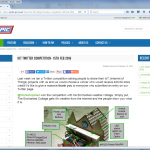 The Enchanted Cottage is having a bit of a revisit this month, it was entered in the Proto-Pic Twitter IoT competition and won a £20 gift token. It’s also being showcased a the London Arduino meetup event later in the

Enchanted Cottage in the news 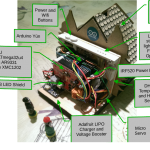 The Enchanted Cottage has been getting some press this week. Following the announcement on Element14 there’s been an official press release about the competition. Also several magazines have run with the story. Components In Electronics – Miniature IoT-enabled cottage wins 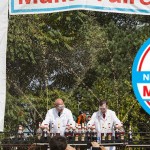 I’m happy to announce that my project was selected by the judges from Atmel and Element14 to be the winner of the Enchanted Objects Design Contest. The judges were impressed by the content you produced and how you blended mechanical 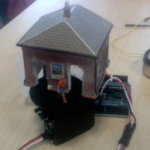 I’d not actually done much research into if anyone else had already done built a weather house similar to the Enchanted Cottage project. Following the project I had a check and it turned out that there is at least one 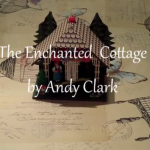 Today was the final day for any submissions to the Enchanted Objects Design Challenge. As well as completing our projects we were tasked with blogging about the challenge on the community website, hence why you’ve not heard more about it

3D printing which way up? 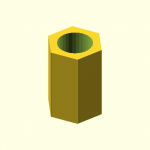 For the Enchanted Cottage project I wanted some spacers for between the Arduino Yún and the shields so that it would be securely mounted on the chassis. There’s not a lot of space so I designed some in OpenSCAD with 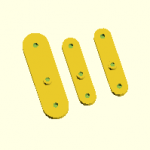 For the Enchanted Cottage project I decided to make the mechanism for moving the figures using a 3D printer. I thought that ABS plastic would be a good material as the parts would be light weight and by printing them

For the Enchanted Cottage project I wanted to add a structure to hide all the mechanics and electronics. Because the weather house was made from 3mm plywood, I thought it made sense to make the rest from the same. The servos also needed testing so to make this easier a simple test rig was made.