These are the making and repairing projects that are complete. Click on the title or picture to read more. Inspired by Terry Pratchett's The Luggage, the Babbage's Baggage is a remote controlled treasure chest with legs.Babbages Baggage For the MakerCentral exhibition I made myself a name badge that showcased some of the skills I know. The base was wood which was framed with brass. The detail was my name in EL wire and a 3D printed logo.Badge A circular bezel to mount around a shower fitting. An early lathe project where I upcycled an old piece of computer case into a stylish cover for a friends bathroom.Bezel

A Christmas decoration in the shape of a tree with flashing and multicoloured LEDs driven from an Adafruit Trinket board.Christmas Tree Trinket A jig for a woodworking router for cutting circular slots.Circle Jig 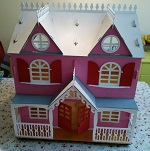 A kit dolls house that was painted and fitted with some stronger parts.Dolls House An electronics project to build a device that detects dragons and alerts the knights to spring into action.

The project was entered in the Qualcomm Maker Month Contest 2016 and was featured on their Developer of the Month blog.
The detector is activated by a passive infrared detector which activates the webcam to take a picture. The webcam image is passed to a computer vision library called OpenCV which determines if a Dragon has been detected. The defences in the form of lights and motion are activated and the operator is notified using the IFTTT maker API. The brain of the device is the DragonBoard410C running a Linux operating system, the control code is written in Python with libraries for the GPIO access.

Code for the project is on GitHub
Details of the electronics can be found at Element14
The mechanical aspects and enhancements are detailed here.Dragon Detector The Enchanted Cottage was built for the Element14 Enchanted Objects Design Challenge. A weather house was stripped down and fitted microcontroller, WiFi, 3D printed mechanism, fibre optics and an RGB LED.Enchanted Cottage

A metal sculpture in brass, mounted on an 1800s French CoinFlea Chariot

A small wooden stool that was made from the posts of a 4 poster bed. It took a couple of attempts to complete this and plenty of things were learnt along the way.Footstool

Making and using a flowerpot furnace for melting aluminiumFurnace

A metal pin to support the catch on a metal gate. The old pin had rusted away and needed replacing.Gate Pin

A small hearth for treating metal and other hot projectHearth

A giant-sized LED and Resistor that actually works.Jumbo LED

A magnifier lamp to help with SMD work, made with scrap materials and 3D printed parts. I've tried to use as much as possible from my "scrap box". The aluminium components are things I cast from old hard disks back in 2008. The base was found dumped outside a furniture shop by Euston, I squared it up with a saw and surform before drilling, sanding and varnishing. The arms were from an old garden parasol that had got worn out by the weather. I believe they are teak. They were planed and sanded to size before drilling. These will likely be left in a natural finish. The 3D parts are designed using OpenSCAD and printed with a Cel Robox printer.Magnifier Lamp

A garden workbench made from a simple plank constructionPotting Bench

A wood and lino stamp for printing a logoPrinting Stamp

Each year for the PSTOIC dinner we have a "Something" competition where people can bring along an item or items that fit the theme. These are then judged and the winner is awarded a medal that I've been making since 2015.PSTOIC Medals 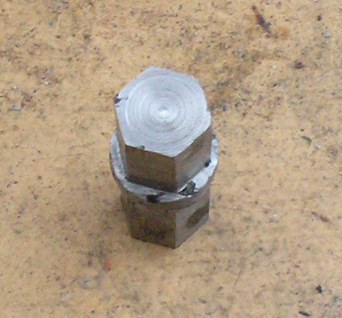 A leather sandbag for forming metalSandbag A stainless steel unicorn robot based on a cardboard template from Ross Atkin of The Crafty Robot and controlled using his new SmartiBot controller and software.Stainless Steel Unicorn

T shaped nuts for securing parts to a slotted table. These were milled on the lathe and are used on the drill table.T-Nuts

A mantel clock with the numbers in Topsy Turvy locations. This project is a mixture of mechanics, electronics and embedded firmware. It won a prize in the Maplin Arduino competition.Topsy Turvy Clock Here’s a couple of projects that I did for HackSpace Magazine last year. You can find all the code on my Github repo, https://github.com/Workshopshed/HackSpace Skull For HackSpace #12 I teamed up with The Kuriologist and we created this monkey skull This week sees the release of Diyode magazine #26. I’ve been working on a project for them for a few weeks now and it’s been split up into 3 parts. The first 2 are in this edition. The main project The other week we visited the Harry Potter experience over by Watford. For some pictures see Instagram or Twitter. In the shop, there were some replica wands made from plastic and they were £32 each. Much as I love a HackSpace magazine is in it’s third edition now and I’m happy to say that I’ve another article in this one. All of the editions can be purchased or downloaded from their site. XMAS Light In the first edition of HackSpace I wanted to do a mini project with the BeagleBone Blue that would utilise all of its servo capabilities. So I came up with the idea of a mechanical glockenspiel. There was not much to the mechanical aspects other than The welded flea sculpture made as part of my Artist Welding course at Chelsea is now finished. The slate base has been drilled and filled with epoxy and the mounting plates screwed down to it. The backlegs were also tied