I decided to do a bit of brazing in the workshop last evening and rather regretted it. After cleaning the metal, setting it at right angles and putting on some flux, I started to heat it with my medium sized torch as it was a lot smaller than the gate (See lessons in heat). My torch is just a little regulator that fits onto the top of a small gas canister which also happened to be a new canister. 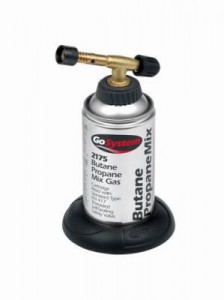 The first time I tried to use this torch it flared badly i.e. the nice strong blue flame about 2in long turned into a orange fireball about 12in long and 4in across (it’s a small torch hence also a small fireball). I’d presumed it was because I was trying to remove paint from the gate and some chemical fumes had got in the air intakes. When I used it again on the gates later it was not a problem. So I did not expect an issue with this job as there should have been few paint fumes. However, it flared again, a couple of times setting off my smoke alarm.

My conclusion is hence: