A smashing blog for the end of the year

On a recent visit to the Workshopshed my nephew Duncan pointed at one of my hammers and asked what it was for. So I though I’d put together a quick article on different types of hammers. The hammer in question was cross pein hammer. These are used for shaping metal and can also be used domestically for hammering in panel pins.

It’s sister hammer is the ball pein, which is also used for forming metal. It’s origional purpose was for peining (or peening in the US) which is hammering the metal to stretch it and relieve stress or to work harden the surface. It’s often used for flattening metal following welding or brazing. Peining can also be used for sharpening scythes.

The kind of hammer you will most commonly see around the house it the claw hammer, it’s used for both hammering in nails and removing them with the levering effect of the claw.

Mallets are not used for hammering in nails, instead it’s used for assembling items such as furniture. They are also used with a chizel to cut wood or sometimes stone. 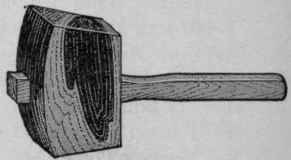 Hammers come in all shapes and sizes, large hammers such as a lump hammer or the bigger sledge hammer are used for demolishing buildings.

One of the smallest hammers is a machinist’s hammer which is in fact a small metal mallet used for tapping pieces of metal into the correct place for machining. The machinist’s hammer is a favourite project for learning how to turn items on the lathe as the design requires many operations such as taper turning and cross drilling.

Jewellers use special soft hammers made from materials such as copper, rubber or rawhide which can be used for shaping metals without scratching the surface. They need to be careful with their rawhide hammers as dogs like to chew on them.