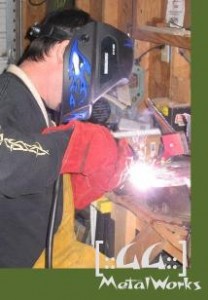 This week, I got a chance to quiz Tim Adams from Gatergrotto Metal Works. Tim is a self motivated artist working with metal, rock and salvaged parts. He uses a mixture of tools and techniques from his “redneck forge” for blacksmithing through to modern power tools and a MIG (GMAW) welder.

Workshopshed: Hi Tim, how did you get into working with metal?

Tim Adams: It was by chance that I got into it. It all started while working for corporate America and going to the doctor for many things, finally ending up in a psychologist office for a four hour review of my brain and being told that I was stressed. So I had to do something that was for me, if you are working for someone else and all their goals are not your own then it is really tough to have any well being.

At first I did not know anything and took old forks and spoons and welded them together with an oxy-acetylene torch. I found it very expensive to refill the bottles, so I sold it and purchased a mig welder and plasma cutter. As time has progressed I have noticed that I like blacksmithing and that it is easier, and easier to put things together to make something. Also with practice anyone can become as great as they want to be “not to say I am great by any means” though I strive to make everyone happy with all my metal creations. A little bit of self reflection never hurts either!

Workshopshed: Many of your pieces are of plants or animals, where do your influences come from?

Tim Adams: I have many line drawing books that I reflect on and use. A couple of examples that are put out by Dover books are 4001 animals and plants; I also just bought 1415 animals. It is hard to see things in 3d until you actually put them together with clay or do a cardboard cutout of them. When I was younger I lived on a ranch and have always like the country western feel, though I have a lot of influence from what I want to see in my back yard.

Most of the time while I am sitting in a meeting or other event that does not take all my energy to focus on I doodle in my journal, I have pages of things I want to do, though it seems that there is always a commissioned piece that I have to do before I can do something really creative, which keeps me excited because a bit of money never hurt anyone’s cause.

Workshopshed: One of your recent creations was “Light of the Petrogyph”, what can you tell us about that?

Tim Adams: Oh! This piece fought me the entire time and I still get scared thinking about making more then one. I did learn a lot about things while I put it together though and bask in its luminance all the time, which brings me to reflect that without difficulty comes nothing.

When I first started it I have to say that the rock base was going to be more of a focal point of the piece, but after looking at how it was going to have to hold together, I had to make a base for the rock. The spring is out of an old mustang and was not that easy to get it out of the junk yard, I learned another lesson that it is easier to go the scrap metal yard to find what you need, because it has already been declared and cut out of whatever it was in. I think the only item that I had to buy was the lamp hardware and the angle iron for the shade.

It is interesting to note that total cost was about $15. That does not include time spent though. That would have to be around $400 if you figure $20 per hour, but that does not matter because it was all for the love of putting something together that will outlast me. “HOPEFULLY”

Workshopshed: Where do you get your materials from?

Tim Adams: Mostly from the scrap yard, I find it so intriguing to search through what everyone else has decided is scrap. We humans throw so much stuff away that it is not even funny; yes we do recycle it, though even that takes power to reclaim it into something new.

1. Bought a new one since old one is old. This is a waste because had to make the new one.

2. Take it to the scrap yard. Use gas in the car to drop it off

3. Cut it up into manageable pieces. Uses oxy-acetylene and or electricity

4. Metal goes to a plant that has to be hauled in a large truck far away to be processed into something, which takes a lot of power to change back into something usable again.

5. I have probably missed some steps, but you get the picture.

This is ironic because what is started out to be, it could be again. Not to say that I do not have to use gas to go and get the metal. My hope is that I can change its destiny and save a bit of power it takes to process it. 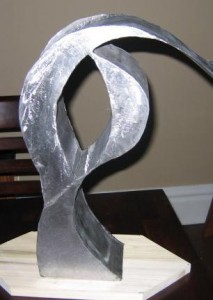 Workshopshed: You mentioned that you are learning as you go along, are there any particular skills or techniques you are particularly pleased to have learnt?

Tim Adams: Hum, interesting question….I would have to say that just getting back into the concepts of welding again has been my biggest challenge. While I was in the FFA I did a lot of welding, though art welding is a lot different. You have to weld in a lot of different positions and get the weld to hold together with a lot of different types of metals. Also I have to add that getting to know the types of metal has been an ongoing learning. At first I just grabbed items that thought would weld together, though was just pop metal or aluminum that just burned through.

Workshopshed: Are there lots of gators in Cedar Rapids Iowa? Would it be a dangerous place to visit?

Tim Adams: HEHE!! I have to preface this with, how many movies have you watched that Iowa has been mentioned as some point or there is a sign point to Iowa. You might say not many times, but it is like when you have a car and see everyone else with the same car, but when you do not have that type of car you never see it. I think it has something to do with like thing always attract each other, like magnets!

The Gatergrotto actually was created when I first got online. I thought to myself that I really need to come up with something unique so that when I signed up for something I would never have to worry about someone else having already taken it . As time progressed I found that my username had a life of its own. Have you ever did a search on Google for your username and seen what they are doing. Mine was having the time of it life!!!!.

So you may be asking yourself what does this have to do with gaters in Iowa, “which there are none since it gets cold in the winter” well if you look at it gaters is misspelled, and no I am not spelling challenged, though some times I do turn off the F7 key. Gateway was my first computer and I lived in a basement, if you can picture me in a deep, dark basement on a computer covered with smoke “I smoked at this time” then you get the picture. Thank you everyone for making it an interesting day, I hope I was just as interesting.

Workshopshed: Tim, thank you for taking time out of your day for an interview.

You can reach Gatergrotto on the web or via twitter @gatergrotto