Over the weekend, I tried to drill the half crescent shaped holes in the arms of my knurling tool. The original idea had to be to have an 8mm hole but when I held it up against the metal it looked too small so I decided on 14mm instead. I bought myself a 14mm blacksmith drill (smaller shank) and some 15mm mild steel rod. The plan was to turn the rod down by 1mm to get a perfect fit for the D shaped pivots.

It started out well. 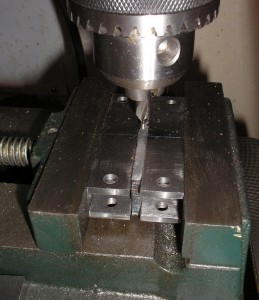 I clamped the two arms with some 3mm bar as a spacer and centre drilled to start off the hole. 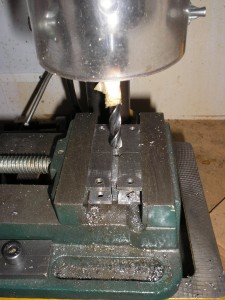 This was increased out to 6mm then 8mm then 10mm. At this point I ran out of drills, the only one left was the 14mm. It’s only a couple of mm each size I thought, it will be ok. I mounted the drill in the chuck and hit my first problem. When I tried to slide the vice into place there was no clearance for the drill, I was short of about 20mm in height on my drill. After a little head scratching I came up with the idea below, to flip the drill table over. 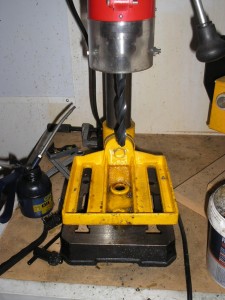 I remounted the vice and lined things up. My usual t-nut bolts were not long enough to clamp the vice this way up so I used a couple of ratchet clamps instead. Once securely mounted I proceeded to drill using copious quantities of cutting fluid. The drilling seemed to go ok but looking at the resulting half holes they are slightly off round and there is also a flaring of the holes. So what went wrong?

Obviously if I’d used a range of slowly increasing drills from 10,11,12,13,14mm then each would have been cutting less and hence reducing the strain on the drill and clamping. I expect that the long length of this drill also did not help. The pictures of other people I’ve seen doing this operation have been using a milling machine and end mill which would be more rigid and the cutter would be a lot shorter.

I’ve been looking at alternative approaches to this problem and a potential to fix my holes.

It might be possible to purchase or make a reamer of the right size to straighten out my holes. A 9/16 reamer (14.2875) would be about the right size but it’s another £20 to add to the bill and I’m not sure if this is a size I would use again. Making a reamer would require a bar of the right size and a little grinding and heat treatment so is worth investigating.

Boring in the lathe

David from South Africa bored his arms in a lathe by mounting them on a sheet held in the chuck. I like this idea but in my case the lathe is smaller so I’d not be able to mount them like this. An alternative to mounting the work in the chuck for boring is to mount it on the cross slide. This is popular for mounting large/irregular items such as when boring cylinders. This approach can use a long boring bar mounted between centres, this is the most reliable approach. However it is also possible to have a simpler boring bar mounted in the chuck.

The final option is to buy or make a boring head to use in the lathe or drill press. What this space and I’ll let you know which I pick and I get on with it.