Tomorrow will be the Oxford and Cambridge boat race when two lots of students who’ve been neglecting their studies will attempt to row flimsy craft (with no passengers) along the Thames whilst lots of people on the bank drink booze and bet on the result. To be honest the only reason I’d watch it is to see if one of the boats is going to sink or crash into the other.

I’ve been advised by a rowing expert that THE event to watch is actually next weekend, the “Head of the River Race” promises more boats, faster rowing and a range of international crews from all walks of life.

I wondered if there were any more interesting boat races to watch and a quick google search identified: 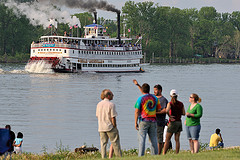 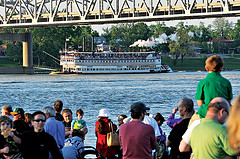 Last year’s winner was “The Belle of Cincinnati”.

“The Great Steamboat Race was first held in 1963, with the Delta Queen capturing the inaugural contest on the Ohio River. The race was cancelled once in 1967 and rescheduled in 1983 due to high water. Three other boats have won the event – the Julia Belle Swain in 1976, the Natchez in 1982 and the Spirit of Jefferson in 1999.

The new Battle of the Belles takes the annual river rivalry to a new level as the boats and their crews compete in a series of challenges and tasks throughout the day – culminating in the race down the river at 6 p.m.”

The idea behind the race is from the 1880s, when paddle steamers raced in front of prospective clients. The captain of the best ship will be presented with a set of antlers to be displayed onboard for the year. Tickets can be bought if you wish to travel on either ship or you can picnic along the riverbank if you just want to watch. The race is actually one of Diesel vs. Steam with the Belle of Cincinnati being powered by two diesel engines hence the race is done on a points system to factor the larger turning circle of the true paddle steamer. 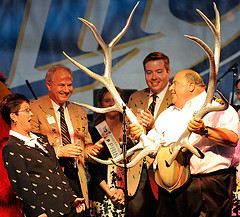 The Kentucky Derby Festival got its start in 1956 with a budget of $640. The premise of the early festival was to “create a celebration allowing the entire community to take part in the excitement surrounding the Kentucky Derby.” As well as the Steam Boat race other events include a Balloon fest, Fashion Show, a Marathon, an air show, fireworks and Bed race.