Today is the day of the Royal Wedding of Prince William & Catherine Middleton. There will be lots of coverage of the people, Westminster Abbey and the wedding dress. So on first appearances there’s not much to talk about from an engineering perspective.

However there are also 5 horse drawn carriages that will be in the procession back from the Abbey so I thought I’d research one of these, the 1902 State Landau. If it happens to be raining then you’ll find that this carriage will have been swapped with the “Glass Coach” by Peters and Sons (1881). 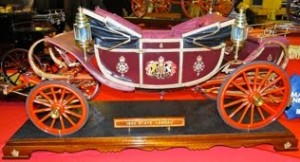 Model of the State Landau made by Peter G Smith, Photo thanks to David Carpenter of the Model Engineering Website, it took around 12 months to build this model. You can see Peter Smith at the Wargrave Local History Society in September.

According to Wikipedia, the landau is “lightweight and suspended on elliptical springs. It was invented in the 18th century (first noted in English in 1743 [2]) and was named after the German city of Landau in the Rhenish Palatinate where they were first produced. Lord, Hopkinson, coachmakers of Holborn, London, produced the first English landaus in the 1830s.“ 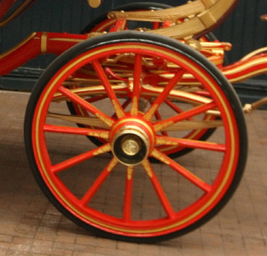 You can clearly see the elliptical springs on this photo by Dominic Lipinski.

The State Landau was built by high-class coach builders Hoopers and Co. for Edward VII’s coronation. 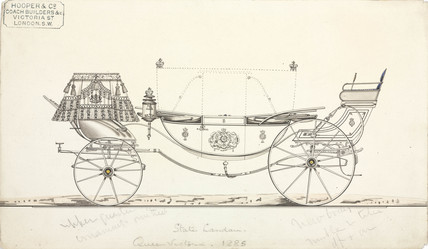 Established in 1807 by George Adams and George. N. Hooper, the firm gained its first Royal Warrant in 1830 with their appointment as a coach builder to King William IV. In 1833 Hooper help contribute to the Encyclopedia Britanica’s article on carriages in particular listing a range of modern carriages and their origins. 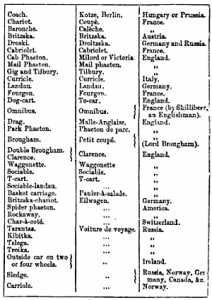 Hoopers produced some inovations in carriage design including the introduction of the C-Spring suspension which won then a Prize Medal of the Great Exhibition of 1851.

Hoopers later moved into motor cars, building custom bodies for Rolls Royce and Daimler motor cars. During WWI they helped build the Sopwith Camels and then in WWII, Hoopers built wings, tailplanes, drop tanks for the DH 98 Mosquito by De Havilland Aircraft. Due to lack of demand for custom made car bodies and lack of skills they closed down in 1959.