Michael Thompson has recently finished building a bike made from wood, the SplinterBike. No metal, plastic or rubber parts were used at all. The main part of the bike is made from birch, the axles from the hardwood ekki and oily ironwood (Lignum Vitae) as a bearing material. There are no screws or bolts holding this together just a selection of sophisticated glues. Even the gear train is made from wood with a huge 128-tooth cog linking the chainring and the gear on the rear wheel.

The SplinterBike team are preparing for a world speed records but Michael has found some time to tell us about his workshop and some of the equipment and techniques used for his bike.

Workshopshed: Hello Michael and thanks for taking time to talk to us about your workshop and amazing bike project.

Your workshop has a slightly unorthodox construction in that it’s made from rammed earth. How long did it take you to make and what did you learn along the way?

Michael Thompson: Building the Eco-Shed was a leap of faith as I had only discovered rammed earth construction a few months before going ahead with building the workshop. I decided to use this method as I simply couldn’t afford to build a wooden workshop of this size (60m2). It took two people six months (2700 hours) from start to finish which I admit is a long time but it will stand for hundreds of years which is a lot longer than a timber building and it only cost me £2,700 in materials to build. I learnt that not only is it dirt cheap to build with earth but you create something that is natural to its surroundings as we also covered the roof with sedums, grasses and wildflowers which replaces the land used in the footprint of the structure. Don’t get me wrong, I’m not wandering around in a pair of sandals and a tie dye shirt, far from it, it just makes a lot of sense to build with what’s around you and avoid waste. You can learn more on one of my building courses this summer or download the DIY Rammed Earth eManual.

Workshopshed: One of the essentials for rammed earth construction is good soil, what can you tell us about your soil improvement device.

Michael Thompson: You actually need subsoil to create a rammed earth wall. This is found about 6-8 inches below the topsoil. Once you have excavated the subsoil you will need to sieve it down to a manageable particle size. This is where SID (Soil Improvement Device) came in, a simple contraption that initially enabled me to sort out the topsoil in our garden for the raised beds. He processed the soil into three grades… under 12mm (for the raised beds and later for rammed earth), over 25mm (which was mainly glass, plastic and hardcore, which got buried under the shed floor) and gravel between 12mm and 25mm which we used for pathways around the garden. This video explains things better maybe.

SID has now been condemned on health and safety grounds – he served us well and must have processed over 60 tons of earth in his short life. TREV (no acronym worked out as yet) is now the new kid on our block and is a much more efficient sieving contraption.

Michael Thompson: Amazingly well. The rammed earth walls are breathable yet don’t allow moisture to travel to the inside of the building. This means that moisture, which can result in mould growth and surface rusting to your precious tools, does not occur. Also, the thermal mass flywheel effect of the rammed earth walls effectively turns the building into a giant storage heater, absorbing the heat by day and releasing it inside during the evening. This creates a stable temperature without dramatic heat fluctuations inside. Having said that, the extreme winter we have just had did jog me into installing a woodburner just to take the edge off and help the wood glues I use to activate and set properly.

Workshopshed: What equipment do you use in your workshop?

Michael Thompson: I think it would be easier to say “What equipment don’t I use” and the answer to that would be a CNC machine. Everything else I have available to me in the Eco-Shed. I have owned CNC machines in the past when I had a large furniture factory but the shed is just not big enough and I can always blag a bit of time on one at my friend’s factory nearby. 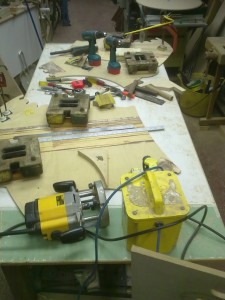 The power tools I use most often are my Makita radial arm saw, Kity bandsaw, Axminster mortiser, Dewalt router, Myford lathe, Bosch skillsaw, scheppach table saw to name but a few and of course I have countless hand tools at my disposal, some new but many very old.

Workshopshed: Do you prefer to work with hand tools or power tools?

Michael Thompson: Power tools are great for the speed and ease of getting through a lot of the general tasks undertaken in a joinery shop, you can’t beat a good quality machine for mundane and repetitive jobs you often have to deal with. Then again when time is not so important, getting your prized plane out and shaping something up for a special piece can be more than satisfying.

Workshopshed: Some of the components such as the gears and wheels of the splinter bike are quite large, how did you go about turning those?

Michael Thompson: I didn’t turn any of those particular components of the Splinter Bike on the lathe, instead I used a homemade rotating router jig to spin the circular shapes out.

Workshopshed: Did cutting the gear teeth cause any specific challenges?

Michael Thompson: The gears were initially printed out on paper templates and glued on to mdf and then I cut the teeth shapes out by hand to create the master templates. I used a homemade Pin Router to copy the actual gear parts out of Birch Plywood from the MDF templates.

Workshopshed: How did you go about selecting the right materials for the job?

Michael Thompson: Most of the materials came about by accident, I managed to talk a large plywood wholesaler into giving us the birch plywood we needed, the 50 year old Ekki was salvaged from a company doing a maintenance contract on the Norfolk Broads and was being pulled out of the river bank to be replaced. The only wood that I had to specifically obtain was the Lignum Vitae, this is a naturally oily hardwood that is essential to reduce friction where one part turns against another part on the bike.

Workshopshed: Given some of the specialist hard woods used in your bike how did you go about machining those?

Michael Thompson: Carefully, we only had a small quantity of Lignum Vitae and Ekki to play with so errors were not an option, these timbers are very hard indeed so it was imperative that I only attacked them with very sharp blades. In fact, the Ekki I used to turn the handlebars was so hard I used the metal turning attachment on the lathe so I could slowly but surely create the correct contours for the finger grip positions. 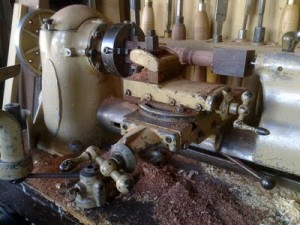 Workshopshed: And finally, being a joiner by trade you claim to be able to make anything from wood, apart from a wooden bike, what are your other wooden achievements?

Michael Thompson: Nothing completely out of the ordinary really, Splinter Bike excluded of course, I have worked on all sorts of pieces and projects over the years. I’ve made bespoke furniture for the rich and famous, restored mahogany speedboats, built staircases of various shapes and sizes, supplied large pieces of art for well known artists, TV news desks, reception desks for government departments, kitchens, windows, doors… all the usual suspects you would expect to be made from wood and wood based materials.

I’m looking forward to starting another sideways looking project soon, but first we need to get this land speed record in the bag before the end of the summer because in September the Splinter Bike is off to the Victoria & Albert Museum to be included in an exhibition called “Power of Making” which is the icing on the cake for this particular project, I couldn’t have wished for a finer final resting place.

Workshopshed: Michael, thank you again for your time to be interviewed and the effort and time you’ve put into to your building and bike.