One of the things I use quite a lot of in the workshop is bolts so I thought it would be worth researching a little.

Thinking back to my time in the Dowty Aerospace apprentice workshop I do remember a debate about Machine Screws vs Bolts. The tutor there had a quite simple definition. If the item was put into a hole then it was a machine screw, if it required a nut then it was a bolt. I think this is a good definition but raises the interesting issue that a particular item could be both a bolt and a machine screw dependant on how you planned to use it.

Looking around the web the there still seem to be some slightly conflicting opinions, unfortunately none of them cite their sources so as someone commented on Wikipedia we can’t really call them a definative reference.

“The department of homeland security actually makes the call because it effects import duties.”

Distinguishing Bolts from Screws
and
Fasteners of Heading 7318

Their definitions are very similar to my old tutors.

Something that is clearly defined is the range of different head styles you can have on a bolt or screw. These are chosen for many reasons, often there is a functional reason such as the need to have head flush with the surface, spreading the load or ensuring that the correct torque is applied. 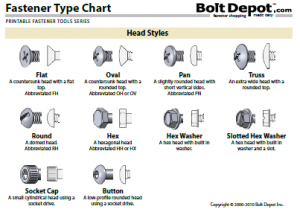 In my workshop the head is often chosen for cosmetic reasons. For workshop tools, I’m a particular fan of the socket cap head partly because of it’s appearance but also because it does not have jagged edges to catch my knuckles on. Older workshop equipment often has thin square headed bolts which are not so common now. 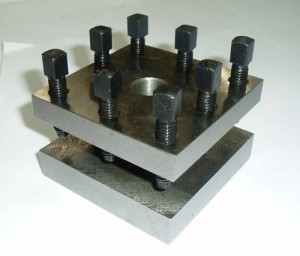 You may also find yourself making a nut and bolt if the size, shape or material is unusual.

If you thought counter sunk screws were only to hide the heads then think again, in the countersinking handbook, Laroux Gillespie describes pages of reasons why you might want a countersink head on your fastener, from reducing stress points on the edge of holes to improving assembly and accuracy of tapping. He also looks at how shallower angled countersinks are suitable for use with sheet metal such as aeroplane wings.

As well as selecting the head style you can also choose the type of drive e.g. a straight slot or cross head for use with a screwdriver or a hexagonal hole for use with a allen key. There are also specialist drive types such as security and torx. You might want to standardise on drive in your workshop or projects or use a particular type to be historically accurate for a model. Access should also be considered as the bolt might be resessed down in a counter bore.

The strength of your fasteners in model engineering is often not an issue as the loads are significantly smaller than in full scale engineering. In many cases it’s the material that will define the strength. For example brass and stainless steel are less strong than carbon steel. Bolts with higher than standard strength are marked with lines or numbers which indicate their material and grade. Other factors to consider if strength is an issue are the diameter of the bolt, the length of the thread engaged with the nut/hole and the relationship between the hole and the edge of the material.

There is an even larger variety of nuts available, here’s a selection. I’ve come across most of these in my time repairing bikes and disassembling various items. 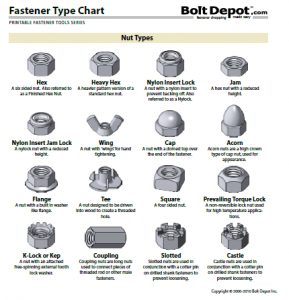 One type missing from this list is the T-Nut which is slotted into a mill or drill table to secure your work piece. Althought I’d seen most of the above examples I was still surprised when I saw them all together. The variety and choice of bolts can be quite overwelming but there is plenty of advise available from nut and bolt suppliers so you can select the right one.

One thought on “Nuts and Bolts”