When I inherited the Workshopshed I was impressed by the clear plastic roof and how much light it gave. However as the first winter hit I spotted that it provided no thermal insulation at all and also had some issues with leaking which I attempted to patch up. In the summer the opposite problem occurred at the workshopshed became unbearably hot. 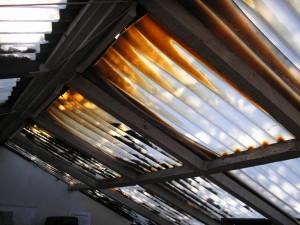 The corrugated PVC had become discoloured in the sun and when I removed some of it from the side I also discovered that the UV had made it really brittle.

So it obviously had to be replaced so I thought about how it could be done. I looked multiwall polycarbonate sheets and these seemed to have better thermal properties than the old PVC. However when I costed out replacing the whole roof with that material it was quite expensive. So I then looked at replacing the roof with wood and insulation with a traditional roofing felt and a smaller pannel of polycarbonate.

Over the last 4 days I’ve stripped off the old roof and with some help replaced it with a new one.

There’s still work to be done to seal around the window and tidy up some of the edges of the felt but you can see the results below. There will be a more detailed post in the near future with how the build progressed. 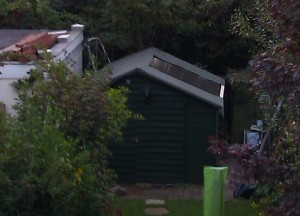