New Anvil from a railway track

I spotted a little anvil on ebay and though it would make a good addition to the Workshopshed. 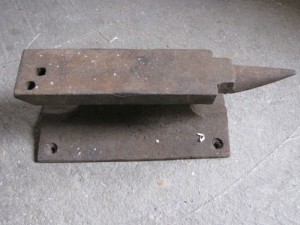 Before purchasing this, I only had a tiny anvil on the back of my vice and previously when I’ve tried to do simple forging operations (such as making my lift out tongs and pouring shank) it was not big enough to be useful. However, I also did not want a 150kg anvil that I’d not be able to move around the workshop easily and that would cost a fortune.

I had the winning bid and paid a fair price for the anvil, a little bit more than a new one of the same weight though.

When it was shipped the seller gave me a tracking number. This allowed me to follow it’s rather convoluted journey. Faversham, Aylsham, Hatfield, Cambridge, Hatfield, Hayes, Hatfield, Enfield, Workshopshed.

View Travels of an anvil in a larger map

When it finally arrived, I eagerly unpacked it. It’s going to need a good clean up. I tested it with a file and it’s not been hardened so I might look into doing that once it’s back in shape. I also gave it a bash with a hammer and it’s got a nice ring to it. After cleaning the top with a wirebrush there are some small dints in it, about the size of staples, so I’ll likely give the top a skim with the grinder and some flapdisks. I also plan to put a coat of paint on the sides and base after those are cleaned up. 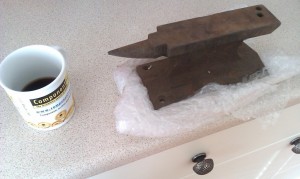 I quizzed the seller about it’s history but they did not know, having seen it I’m pretty sure it’s constructed from a piece of railway track, the proportions and the way it’s been cut strongly indicate that’s the case.

For a stand, I’ve a work collegue looking me out a suitable round log although it might have been nice to make something out of an old railway sleeper!

If anyone has any recommendations on clean up and repair of this old anvil then please leave a comment below.

4 thoughts on “New Anvil from a railway track”