On Monday night I got to attend the London Arduino Meetup, this group is a mixed bunch of beginners and enthusiasts explaining and learning about using the arduino in their projects. The session was based at the Westminster Hub, a series of rooms on the first floor of New Zealand House just off Trafalgar Square. To get to the session I passed by a series of groups discussing a wide range of topics, it reminded me a lot of the Google Campus (but with people who work late).

After an intro by host Marc and a round robin of what we were all upto we got into the talks and demos. We had a good selection, Christian and Liam explained how to connect our arduinos upto the internet of things and Danny showcased a robot kit he’s been working on. Mark from the “Future of Manufacturing” group explained about the Luma Project he’s been working on with another London Arduino Meetup Regular Debbie Davies. Their plan is to build a giant spaceship with lights for Burning Man 2013.

Bring along your projects for the “Jam” session I was told. So late last week, I hacked together a demo of my rotary table project. I wired up a new potentiometer to replace a broken 10 turn one and pieced together a couple of examples to generate double height characters on the LCD display. 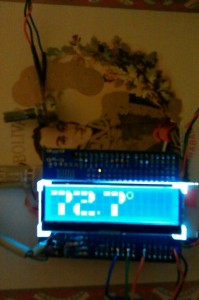 After the talks the 4 speakers setup their kit on different tables and quickly had big groups around them. I was a little hesitant but Marc encourage me to demo my project so I setup at a table near the front. In true maker faire style “If you make it they will come” and shortly I had a few people quizzing about the project. I also had some valuable feed back from Matt who asked if I’d thought of turning the problem on it’s head and driving the table with a motor rather than measuring the angle, he also raised the tricky question of “just how accurate does it need to be”. I have actually looked at the motor approach and although not totally dismissed it, it does raise issues of size vs power for the motors needed. His second question has got me wondering, I’m going to re-read Ivan Law’s book on gear cutting and have also quizzed the chaps on the Model Engineer forum.