I’ve been dabbling a bit with electronics lately which is something I did quite a lot as a kid. Here’s a couple of things I built some time ago to help.

The first which is still in use now is my project box. This is made from sheets of pine which are simply glued and pinned together. It has a drawer for components and a storage box at the top for tools with a simple lid held in place with a couple of battens. The box is about 25 years old now and has survived several house moves. I typically tape it shut before packing. 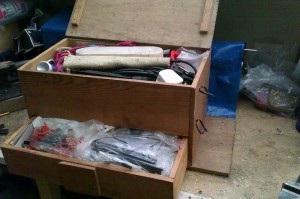 The origional design had a wooden soldering iron stand which broke of one time I was moving house and got replaced with a more conventional iron stand and I added some cable holders on the side but typically the iron lives inside the box now.

The drawer in the bottom has some nice features, it has a clear perspex base set into a slot in the sides which allows you to see the contents from below. The handle of the box is a square with bevelled edges this has proved very reliable of the years. The second thing I put together was a project board made from some bent perspex. This allowed me to design small circuits on one of the two breadboards and have them powered from an external supply that plugs in to a socket at the top. I created an “antistatic” tray and drawer from packaging and the antistatic one has tinfoil lining and can be earthed with a croc clip. I added a selection of terminal posts around the sides of the board for connecting up the power and a small multi-meter I had at the time. I also added a couple of cheap meters that can be used with resistors to measure voltage or current. Some chock block on the front allows for connecting to other ciruits. I’ve not used this for some time as it’s been hidden away in storage. I found it quite recently so perhaps it will be returned to use?