The BBQ needed a few things made so I started on the shelf, that’s quite a mini project in it’s own right so I’ll write about that separately.

However whilst test fitting the frame I discovered that one of the shelf supports was rusty and it broke off. I found a small piece of galvanised metal so folded that up in the same shape as the other brackets and then used a epoxy glue to re-attach it to the leg. I filled the holes around the other supports with the same glue to stop further rusting. 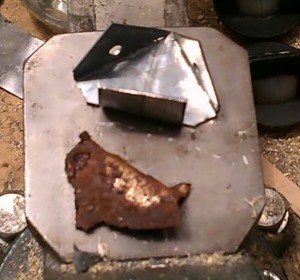 The grill supports were also rusted through so I cut some new ones from some angle iron. 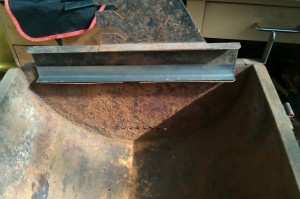 The rusty holes in the bottom of the barrel were filled with the same epoxy glue, this area should not get too hot as the coals actually sit in a tray above it. However a test firing might be necessary before I use it for cooking. 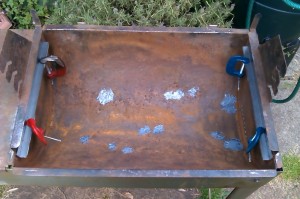 A replacement handle was made from a piece of old garden parasol and some bolts, I think this could be teak as it cuts like a hardwood with a fine sawdust. I counter sunk the screws so that they would not hurt the hands of the person opening the BBQ lid. 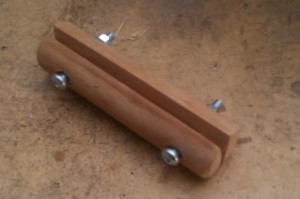 Since fixing the grill mounts with epoxy and filling the holes I’ve reconsidered it’s suitability. I removed the grill supports and cleaned off the epoxy around that and then drilled and bolted the brackets in place. I’ve also cutup a thermalite block into tiles to protect the bottom of the barrel, these should also reflect the heat back up meaning less wasted charcoal. 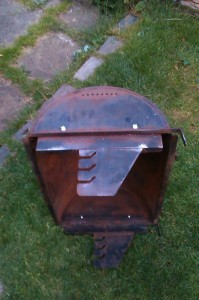 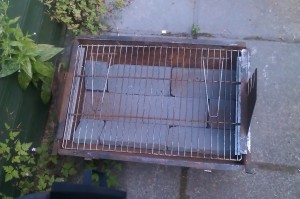