This week I ordered a copy of ManSpace Magazine to read on the way to work. It’s an interesting magazine with lots of variety of articles, this quarter has Ice Marathons, a man who collects parking meeting, surfboard making, antique motor cycles, lots of interviews and an article on Wooden Toy Making by Stuart Lees. It’s a bit of a challenge to read it on my lowspec smart phone as the Zinio application struggles to render the pages and the small screen means for a lot of scrolling. A tablet computer would be a better options but I’ll probably end up reading it on the laptop. 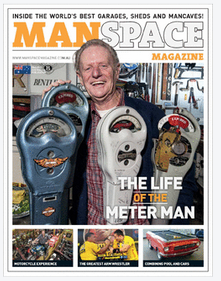 I mentioned that I was planning to read ManSpace Magazine on twitter earlier in the week and one of my followers was a little surprised by the title of the magazine and asked the question,

“with younger generations shouldn’t we be breaking down gender barriers?”

I emailed this with a few other questions to the editor and it was bounced upto Jeff Patchell who is the Managing Director for Connection Magazines Pty Ltd.

Workshopshed: Jeff, thanks for agreeing to be interviewed, so do you think we should be producing only non gender specific magazines?

Jeff Patchell: Absolutely not. Look at all those women’s magazines out there – they may be full of rubbish but it is the largest print market in the world. How about a go for us blokes. ManSpace carves out new territory in terms of quality general reading for men. ManSpace is all about the passions and interests of men, many of which they play out in sheds, garages and indoor man caves. Until now, the only men’s magazines were either special interest (like cars, shooting etc…), business magazines (boring) and stick magazines with page 3 girls (thank you Rupert Murdoch!)

Workshopshed: I’ve flicked through the spring 2013 edition; I’m currently downloading the app so I can read the rest in more detail. From first impressions, there is obviously a lot in there that would be interesting to both sexes and limited that would be specific to just men but it is fairly clear that it’s not just about men it is for men.

Jeff: Our business model is primarily aimed at subscriptions and we know from those applications that it is the wives/partners doing the subscribing – women are experienced at it. We talk to many of them when they ring and they are delighted to see a magazine that the hubby will love and that won’t offend the ladies. Yes, they love the stories too.

Workshopshed: So do you have a following of women readers?

Workshopshed: What benefits do you think having a gender specific magazine has?

Jeff: This one encourages men to get involved in interests outside of their work and especially as they get into their 50’s where they might be working part time or are divorced.

Workshopshed: For me the main interest in the magazine is the content, what’s in there for a shed based engineer?

Jeff: As you will see, we have a small section of timber work and we have some metal work coming up. The projects are very simple for beginners. We don’t aim to be a handyman magazine. 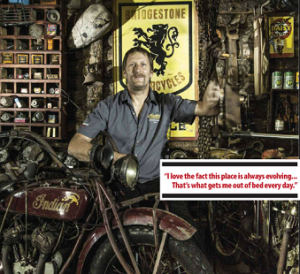 Workshopshed: What’s the history behind why the magazine started?

Jeff: My core business is technical/business magazines for plumbers/builders/electricians which we’ve been doing for 28 years. I’ve always wanted to do this sort of magazine which shows the wonderful things blokes get up to.

Jeff: Could you let me know when the next edition is out and any hints as to what might be in it?

Jeff: We’re quarterly. The next one will be out early November. The good thing about ManSpace is that when you turn every new page, you’re not sure of what you might read/see. However, some of the stories we are working on include: an interview with the blokes at Mawson base in Antartica about how they fill in their time in the big shed down there, a visit we did to a military vehicle plant that make the bushmaster, which our troops have used for 10 years in Afghanistan and no one has been killed in one, review of a couple of new mancaves/sheds that readers have put together, an interview with a guy who runs the last outback travelling boxing tent, the experience of a chap who has done a weekend knife making course with a metalcraft master, a collector who has over 200 bicycles of all shapes and sizes throughout his home – and as they say, lots,lots more…

Jeff: For the UK is the best place to get the magazine as a digital download?

Jeff: Yes, via ZINIO.COM (A custom app is available for Android, Ipad and Windows 8)

Workshopshed: Is the magazine available in hardcopy in Aus?

Jeff: Yes, we do a print edition that Australian residents can subscribe to and we also sell copies in newsagents/magazine stores.

Workshopshed: Thanks again for spending time answering my questions, it’s definately a magazine that fills a niche in the market.

Jeff: Thank you for your interest. Best regards, Jeff