Back in 1986 for my GCSE in “Craft Design and Technology” I had the idea of building an X-Y Plotter for my project. I recently found a couple of photos of the project so I though I’d revisit the project and look at some of the design issues. I’m not planning to build another plotter but if you make one yourself I’d be interested to hear about it. The key features were:

I wrote to the big plotter companies at the time, I think HP was one of them and they send me back some fliers and a few pens to try out. I ended up going with a cheap felt pen as it meant for an easier attachment.

Although it was an ambitious project, I did managed to complete this on time. There were quite a few faults with it. Being of an engineering mind even back then I wrote up those faults and suggested alternatives.

Key faults
The PCB was made with letraset style pads and tapes and it was not until it was etched that I realised that it had been done in reverse. This did not matter for the discrete components but it meant that the ICs had to be mounted on the copper side. An easy mistake to make but given modern techniques for board development this is not likely to re-occur.

There were some issues driving the logic chips from the computer, I believe it really needed the computer output to be latched but I managed to get around the issue with some cunning machine code. The main reason to choose the logic chips option was the price of the driver chips in the 1980s which was about £5. At the time was a lot of money for a young school boy. So I’d definately switch to using a dedicated controller chip.

The chassis being thin aluminium sheet was a flexible. If it had been made a little larger then that would have allowed me to fold the edges over to make a stiffer frame.

The pen holder did not grip too well, addition of some rubber sheet or nowadays some Sugru would sort that out.

The most amusing fault was that I had machined the ends of the threaded rods to fit into the brass bushes. This had been done by feeding the rods through the chuck, clamping one end in the chuck and letting the other end whip around beyond the end of the lathe. The end result was that my rods ended up with a curve in them so all my straight lines ended up as a sinusoildal wave. At the time my proposed solution was to machine a small component to screw onto the end of the rod. I believe that my tutors either did not have a fixed steady for their lathe as that would be an alternative that could be used to machine the end of that rod. However care might still be needed to avoid the problem re-occurring.

Not an issue as such but the motors were just picked up from a surplus store with no idea of how much power they had. I’d definately advise doing some calculations and ensuring that the motors were up to the job.

The plotter was disassembled a few years ago as it was taking up space at my parents house, it was a good project and I learnt quite a lot from it. Perhaps a little more input from my tutors and it might have been a fully operational project. 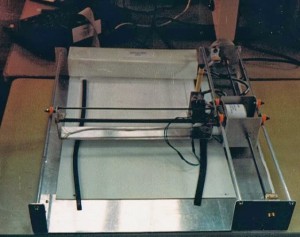 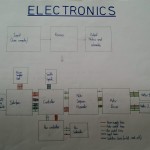 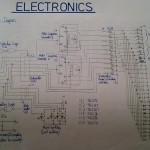