Some progress on the Topsy Turvy Clock over the weekend but still lots to do.

The electronics have been wired up on their host board. The board was a “tripad” board which is like stripboard but the pads are split every three pads. This works very well for wiring up modules and ICs that have a one to one relationship but needs extra thought and wire links for things like power and discrete components where several components need to be connected together at one point.

The hostboard is mainly sockets for the various modules and connectors but also has some resistors for the optosensors and a diode so that the battery and USB power don’t clash, I checked the pro micro schematic and it already has one diode protecting the USB supply. To make the software more modular and easier to write I’ve decided to add a second optosensor for the second motor. This means that they can work independantly so I won’t need to have a clever homing sequence to find the position of the two motors. I checked that there will be space for two lots of sensors within the mechanism.

I will try to get a full circuit diagram published showing how the motor driver, RTC, opto sensors and microcontroller are connected but if you have any question feel free to ask in the comments below. 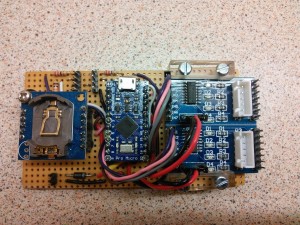 I also had some progress with the plate that supports the motors and the second plate that will attach to the clock body. A few minor changes were made based on the drill bits I had available and also the origional drawings did not allow for clearance and tapping sizes.

The drilling was fairly straightforward, all the holes were piloted using a small centre drill, for the larger holes I started with smaller drills and worked up to 10mm. I did have once case were the drill grabbed on the metal. I stopped, ensured my vice and work were securely clamped, rechucked the drill bit and tried again, this stopped the issue.

The 3mm tapped holes were drilled 2.5mm and then tapped with a HSS 3 tap set, taper, second and finishing. There were no issues with the tapping but there was some “squeeking” so a drop or two of cutting fluid was added. After this photo was taken, I marked and then drilled and tapped suitable locations for the optosensors. 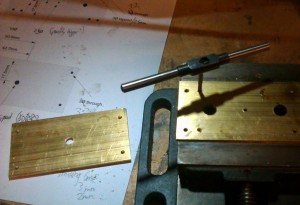 I can now fit the motors and sensors to the plate which can then be tested. There is still plenty of software to write, the new sensor to wire up, spindles to finish and a coupling to be made that will allow the mechanism to be attached to the clock body. My only “unknown” at this time is how I am going to redo the numbers around the clock face.