The HapPi-Robot is a lightweight solution to get you started with turning your Raspberry Pi into a robot. The range consists of a series of Case4-Kit cases, a H-bridge driver board and mechanical parts kit to get your robot moving.

Lewis Wass and Steve Bloye from The Little British Robot Company told me all about their project.

Workshopshed: Chaps, thank you for agreeing to be interviewed. The other Pi cases I’ve seen are acrylic or laser cut plywood, why did you choose cardboard?

The Little British Robot Company: The usual acrylic case and chassis offered by other companies are fine but rather expensive, are hard to modify and are quite heavy.

We use Kre8® SuperSheet a new ‘making sheet’ material we have developed to provide the properties required for making rigid forms at a lower price than acrylic or wood.

Kre8® SuperSheet is made from four layers, each with a different property, glued together providing a surprisingly rigid, good looking, lightweight 3D form when assembled. The attractive protective top glossy printed surface also acts as a hinge when sheet is folded and makes assembly (and disassembly) fast and easy, without the need for glue or nuts and bolts. Robots made from acrylic can break when dropped on the floor. Kre8® SuperSheet is more robust and gives good protection and does not shatter if dropped. Wood is hard to decorate is not to everybody’s visual taste. Both acrylic and wood cannot easily be folded to produce 3D forms.

Workshopshed: Do you need to remove the Pi from the Case4-Pi when you are not using it as a robot or to program it?

The Little British Robot Company: No. The RaspPi once inserted can be left in the Case4-Pi as all connectors and the SD card slot are accessible.

a) act as a normal fully enclosed lid or b) act as lid with an opening so RaspPi add-ons can be accessed or c) to provide a place to assemble a circuit on top. 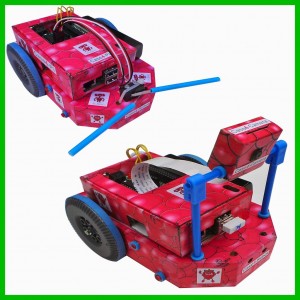 Workshopshed: Why does the Pi need a H-bridge driver board to run motors?

The Little British Robot Company: To prevent the the Raspberry Pi burning out and allow robot steering. Motors require more power than the RaspPi can provides safely and for robots need to be reversed.

The H-bridge chip used can control two dc motors in forward or reverse or can used to control four dc motors with just on /off. Robots need to be able to reversed so this chip is ideal enabling a robot to move:- forward, backwards and spin fast or slowly assuming a program such as ScratchGPIO is used to program it.

Workshopshed: What else can you use the board for?

The Little British Robot Company: Besides motor control the HapPi add-on board provides access to all the connectors including the GPIO pins, camera connector etc and also includes three protected inputs so switches can be connected directly without need for extra protection resistors. It also has a i2C connector for more advanced work.

The HapPi add-on can be used to do just about anything as it can use all the features the Raspberry Pi but also adds robot motor control. Extra circuitry can be added as needed using jumper leads as commonly used with breadboards.

Workshopshed: Is there support for the usual programming environments such as scratch and python?

The Little British Robot Company: Stewart Dunn who has written various school textbooks is producing a support website at www.pi-school.com. The initial focus will be on using ScratchGPIO to control motors, robots, traffic lights and various practical fun activities for use schools.

An easy way to get started is to use ScratchGPIO but more technical users may prefer Python but other languages can be used id supported by the OS community.

Workshopshed: Who are the kits aimed at?

The Little British Robot Company: For anybody who wants to extend the use of the Raspberry Pi by making use of the GPIO pins to make things work in the real physical world.

Workshopshed: How do you see schools benefiting from having robots in the classroom?

The Little British Robot Company: It brings excitement into the classroom and can be made suitable for all ages and abilities. The knowledge gained can be applied to may problem solving activities. The Raspberry Pi is a full blown computer suitable for beginners right through to university level. RaspPi Robots allows open-ended-learning to take place at any level.

Workshopshed: Thanks again for taking time to talk to me and good luck with the project.

One thought on “Robot Kit”