A news headline that caught my eye earlier in the month was a 10000 km train journey from China to Spain (although some reports suggest up to 13000km). The train which had travelled from Yiwu to Madrid was carrying consumer products including toys and tools. The service runs every couple of weeks and passes through 6 different countries. Unfortunately due to differing standards in France and Spain the train has change track gauges 3 times. Even allowing for these changes the train is significantly faster than sea travel and uses less energy than shipping by sea or air. 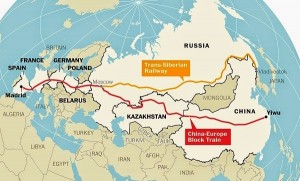 China has been building many high-speed rail links to get goods around the country and further. There is also speculation over a China to USA route that would include an undersea tunnel 4 times the length of the channel tunnel.