Time for the Makers Movement to grow up

Robin Raskin from Living in Digital Times recently wrote about the need for the Maker Movement to grow up. She mentions three key points, firstly to match the items that are made with people who need them, to promote the benefits of thinking like a maker and to systematise the way to profitability and maker employability.

But what actually is the “Maker Movement”? There is no central committee, no rules on what is a “make”, there are no subs to pay, the Maker Movement is not a big company or organisation. So it’s hard to define. It’s slightly easier to define a Maker, that’s just someone who gets enjoyment out of making things. So the “Maker Movement” is really just a collective term for all those Makers. Some of them also like to fix things, some like electronics but others make from cardboard or scrap metal, some are deeply concern about the environment where as others are petrol heads. There’s so little in common it’s really surprising that these people get together at all. But they do, and connections and collaborations are formed, help and resources are given and ideas are shared and debated. But this is all quite dynamic, people go their different ways and new connections are formed. It’s also evolving and making is getting faster and more sophisticated.

Taking the first point Robin suggests AirBnB, Amazon and Facebook are good examples of matching a items and services with someone who needs those things. But does this really apply to the maker movement. I think you have to look at two aspects, what Makers make and why they make them. 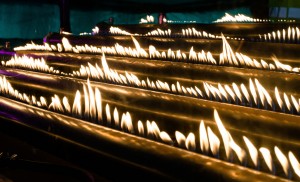 A lot of the things you see at the Maker Faire or in the viral videos on internet are the equivalent of the Victorian Folly. For example the Giant Mouse trap or the Flame organ that will be at this year’s New York Makers faire. They are effectively art and often performance art in the fact that the Maker is the only one who can safely operate them. So there is really a limited market for these items, although saying that I did have a city broker tell me he’d like to buy my Topsy Turvy clock, but sorry it’s not for sale. These items are effectively already with the person who needs them, i.e. the Maker. There are also small makes and fixes, these are less glamorous so are less common at the faires. Again these are often niche or bespoke to fit a local need. Take a look at Ikea Hackers or Homemade tools and you’ll see lots of fantastic creations. Again these are often niche and are already in the hands of the person who needs them.
I can think of a few where Robin’s point is met very well, the first is Tindie. Tindie connects makers with others (often other makers) and provides electronic modules and parts. It’s founder Emile appears in Maker Pro which I reviewed the other month. The second is Remap, this is a charity that connects disabled people to Makers to produce gadgets that fulfil a specific need and on a similar note Caleb Kraft makes custom controllers for games machines for people with disabilities
The other key thing about the things that are made is that they are “makes” not “products”. By this I mean that they have often not been designed for mass manufacture. Anyone who’s gone through that prototype to product process will know that this is a big deal. Even those make nothing companies will know that scaling is a major challenge, you just need to look at the engineering feeds of the likes of Twitter or Facebook to see what goes into their systems to make them work for masses of users. Doing that in software is hard, doing it for hardware is an incredible feat, something that can take years to do. So that means that the makers, “makes” have a limited market and why they are typically one offs or bespoke. Taking my weather house for example, very few people would need a £100+ weather house that takes 60s to give you a weather update. Those two issues are perfectly solvable but would double or even triple the time I would need to work on the project. Getting it to manufacture would take more time still and that would be time that would otherwise be spent making things. Sometimes a project has reached it’s natural conclusion and it’s time to move on.

So that brings me to why people make things, it’s partly about the end result but also about the journey. When Audry built his monster trap it was not about making a product it was to test his hypothesis on failures in complex systems. Mostly people are learning new techniques or just experimenting with ideas. Often just the making is enough, even if the project never gets finished.

Makers like to make things but those are not products ready for the mass market. They are made for the joy of the maker or sometimes bespoke creations for a predefined user.

I did a quick poll on twitter and out of the six responses there were two who were process driven, one who’s focus was the results and three who thought process and result were equally important.

I’d also turn up the megaphone about the benefits to thinking like a “maker.” Even if it doesn’t involve the creation of a physical thing, maker’s problem solving mentality is a healthy asset for anyone in the new economy. Crafting solutions to problems is what it’s all about.

I thought I’d see what others thought the benefits were. Harvard are studying the benefits of design and maker thinking and Deloitte Centre for the Edge and Maker Media as also looking at the impact of the maker movement. President Obama also thinks Makers are important and plenty of Makers are happy to chat to him.

So I’d agree Makers should share their enthusiasm and educate as to the benefits of making but perhaps these efforts need to be more targeted and aimed at those who’ve not yet got the message.

In order for the Maker Movement to grow up, it needs to take a little lesson from those companies that make nothing but connections and start systematizing a way to maker profitability and employability

I really don’t think the maker movement does need to grow up. The innocent joy, playing with things, making silly ideas real and desire to learn are the greatest part of the maker movement. Can it learn from these companies, of course it can. Maker’s mostly don’t care where they learn or get their ideas from. I get mine from Children’s TV and fairy tales. Can it benefit from a systematic way to turn makers in entrepreneurs? I don’t think it can. Many makers are fully employed, some are school children, some are retirees. Do they want to turn their hobbies and fun into a business, some do and become Maker Pros but many don’t they want to be Engineers, Teachers, Architects or Astronauts. But they also want to make things in their spare time.

What do you think? Does the Makers Movement need to grow up?

One thought on “Time for the Makers Movement to grow up”