Little did I expect when I submitted my proposal for a internet enabled weather house that 7 months later I’d be standing in line at the New York Science centre waiting to go into the World Maker Faire. I’d arrived early as my hotel was just a couple of blocks away so wandered around the park surrounding the site. I had a sneak preview of the Life Sized Mousetrap and also got to see the Unisphere, a giant metal globe sculpture built for the 1964-65 World Faire. 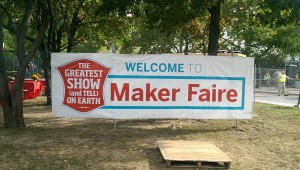 By the time I returned to the entrance at 9:20 there was already a small queue by 9:35 it was round the building! Whilst we were waiting we were given our weekend wrist passes and the kids were given safety glasses. Shortly before 10 we were let into a holding pen next to the craftacular market and were serenaded by a stilt walking jazz band accompanied by a dancing cardboard dinosaur. After a few photos for the press and a group count down we were let into the Maker Faire. I started by visiting Atmel who had sponsored the Element14 challenge and had a quick look around the electronics area. I also visited fellow Brit, Dominic from Just add Sharks who was helping out with the Solarbotics stand. Whilst there I purchased a show T-Shirt and Adafruit Trinket from the Makershed store.

Just along from this I saw some interesting medical makers who were making adaptations for children’s toys. These help those with disabilities use toys and learn motor skills. There was also some Lego models of medical equipment such as scanners and proton beam treatments machines. The models allow healthcare workers talk about the procedure with children and make the whole thing less scary for them. This allows them to avoid sedation which in turn makes the process safer for the patients.

Another interesting project in the electronics area was Patchbay.io by Andy Sigler this allows you to connect up sensors and actuators in flexible combinations without the need for programming or even connecting wires. 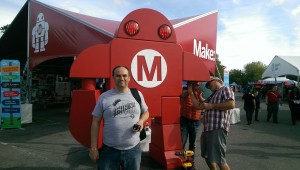 I grabbed an early bite to eat and waited for the a presentation I wish to hear. Over the course of the weekend I attended a number of talks. These included developing for AVR and ARM devices, fixing, making electric go-karts, making a guitar based Midi controller and building boats in primary schools. I also saw shows from Mario the Magician and ExperimentBoy. These were all very impressive but I thought that the maker ones were more captivating that the corporate presentations. I also got to see Daddy Daughter Electronics who I had breakfast with on the Sunday morning at the hotel.

Because the Maker Faire was such a big event I’ve decided to break the report into multiple articles, each focusing on a few key areas, these will be written up over the next few weeks.