The other day I was amused by an article in the paper that a vengeful EU was going to force us to collect our recycling in 4 different boxes and achieve 70% recycling rates. To me this sounded like total rubbish so I thought I would investigate further. 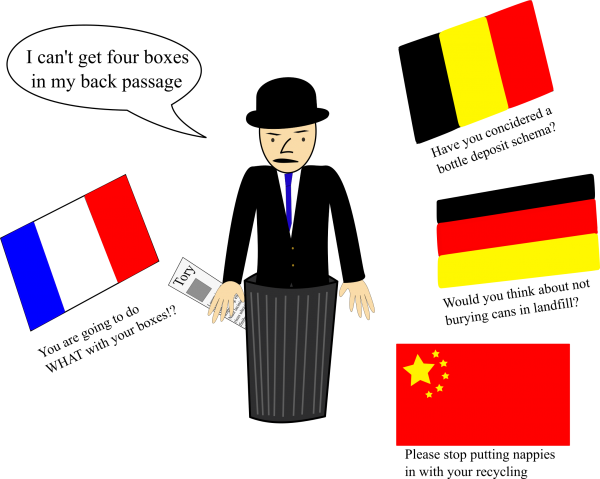 I think the first point of clarification is that this only applies to the transition period whilst we are still in the EU. And as with all of these regulations this has been agreed by our elected representatives the MEPs.

Looking into more details as to what the regulations are, I can’t find any reference to either 4 collection boxes or 70%. Here’s what there latest docs say:

Key elements of the revised waste proposal include:

There are also economic incentives for producers to put greener products on the market and support recovery and recycling schemes.

If Britain steps up and becomes really good at recycling then there could be some new opportunities following departure from the EU. The following document looks at how Britain could become Europe’s scrap yard.

Withdrawal of the United Kingdom and EU rules for the use of the EU waste law.

What day are my bins? Is there an API for that?

I live in London and we have 3 collections for waste, green recycling and general recycling. Even with my simple bin rota I can never remember which week is green bin week. So I had a chat my college mate Russ who happens to be a bit of an expert in these things. He explained that this would be a bit of a challenge.

In the UK refuse collection is something that is the responsibility of the local council rather than centrally managed. Some councils outsource the whole operation so Russ explained that if you’ve got one of those councils you are unlikely to get any data. There are some councils who have the data but it is locked behind their corporate firewalls and you can’t access it. For those who do have data there are still some challenges. Firstly you need to map your post code to a unique property identifier, then map that to a collection area, then finally get then rota information. If you are in a flat then you will likely have a shared property identifier and the bins could be collected on a different day. He also pointed me at the “Local Digital Coalition” who have also looked at this question.

Russ also explained the reason why we have different collections. This is in part because we have different councils running things and they don’t always collaborate. It is also partly due to geography. Out in the suburbs where I live wheelie bins have been introduced and although they don’t look great they do seem to work fairly well. In an urban area where people don’t have a front garden or yard, wheelie bins would not be practical. Also in particularly hilly areas or areas with narrow streets it also won’t work. And flats are always going to be a special case.

It’s the people in your local council office that decide how many bins you have and the associated complexity of the collection rota. They also decide which materials are to be recycled in your area.

It’s unlikely that Brexit will have any effect on how your waste is collected. The UK only has so much land and we simply can’t afford to keep turning it all into a trash pile. So recycling rates will hopefully increase but it’s not part of any vengeance just a practicality of living on an island. Help is at hand, in that the technology behind recycling is continually improving and product design is changing to help with this, the so called “Circular Economy“.

Around me you can leave metal on the curbside and it will be gone before the day is out, collected by modern day rag-n-bone men. Always remember, “Where’s there’s muck, there’s brass”