Saturday was the 8th World Arduino day. Events were held all over the globe including one here in London. Unfortunately I had other commitments so could not attend. 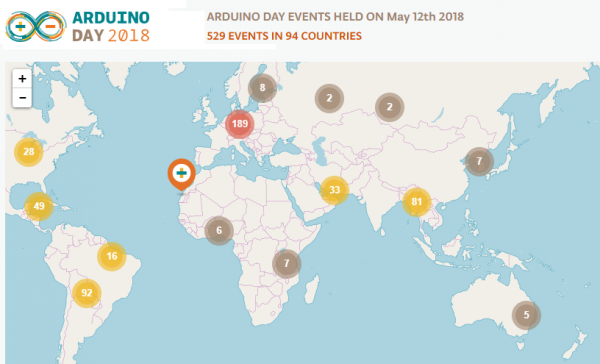 But it seemed a good day to do some experiments with Arduino boards. I recently was given an Arduino Mega by Tariq Ahmad from Element14 and I thought I’d put it through it’s paces. I was under the impression that the Mega was more powerful than the Uno as I knew people were using it for 3D printer controllers.

My first thought for a challenging test for it was to run some Fast Fourier Transforms on some audio signals and use the output for controlling the mouth of a puppet. I did not have any convenient way of getting audio into the Arduino so abandoned idea and instea implemented a mathematical calculation. The day after I spotted that an electret would have worked for the input as Cabe Atwell had done a very impressive Birthday cake with blow out candles project for Arduino day.

The early Arduinos are 8bit which is fine for most things but not so good for accurate calculators. I found the “BigNumbers” library which uses 256bit numbers.

I used it with the example code to calculate first 200 factorials.

I was slightly puzzle as I was not getting faster results from the Mega so I moved onto their second example of calculating E to 50 decimal places.

The Mega completed this in 353mS and the Uno 349mS.
So I looked at the processors used by each of the boards, the Mega is a ATmega2560 and the Uno a ATmega328p. Looking at the data sheets the ATmega328p is fractionally faster than the ATmega2560 at 20 MIPS to 16 MIPS. This is consistent with my results.

I also tried the same code on the Trinket M0 and that performmed a lot better with E calculated in just 98mS.

Unfortunately in the process I needed to reflash the Trinket and seem to have changed the behaviour of the Trinket in that it’s no-longer talking to the LCD screen. I’m now getting an error 5 which is apparently due to the I2C device not responding correctly. The suggestion is to use a bus analyser to see what is going on. I believe I can use the PicoScope to do this and I’ve just bought myself an isolator and powered hub so that I can protect the PC from my rogue circuits.