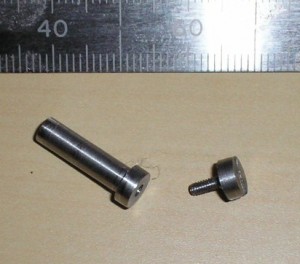 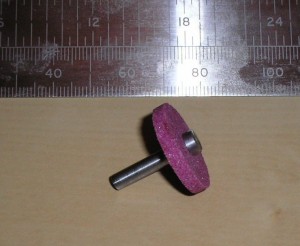 My first mini project on the lathe is complete. The external 2mm thread took three attempts, the first screw cutting did not work at all. The second was good but too long and when I tried to shorten the screw thread, I snapped it. The only significant difference was that I turned the die so that the flat labelled face was away from the work, I had assumed that dies were symetrical as I’ve never seen any advice either way. The third screw thread was the right length and the thread was good. I had to drill a little deeper into the body of the mandrel and tap that to take all 5mm of the screw. To allow the cutoff disk to fit, I also needed to thin down the short section of rod nearest the screwhead where it was not possible to cut thread. The slot in the head was carefull cut using a hacksaw.

Unfortunately whilst testing, I managed to break the one remaining cutoff disk. I may make some small card washers to ease the pressure on the disk whilst still gripping it as this is what is done for bigger grinding disks. If I was to make another, I’d made the screw probably 8 to 10mm long. This would mean that when used with the thicker grinding disks there was more thread to grip. This would make the thread cutting more difficult and the screw would be weaker so it’s perhaps something to experiment with. It might also be nice to have a knurl on the outer rim of the screw and mandrel body so that it is easier to do up with hand.

One thought on “Cut off disk mandrel finished”