My latest mini-project was supposed to be a simple sawing and screwcutting exercise of some aluminimum rods. It proved to be a little more involved than I realised when I found that the thread was 2BA. I purchased a suitable die and then realised that it was a lot smaller to my die holder. My die holder was made from aliuminium with 2 screw in handles. If I drilled through and tapped them, I’d be able to tighten the handles onto the smaller die and hence be able to use it. This works nicely as a solution but I needed a M8 tap. My old box of mixed taps and die for a £10 did contain an M8 x 1.25 plug tap but after realising the joys of tapping using a set of 3 taps, I thought it would be better if I started with a taper tap first. I managed to pick up a M8 plug tap from a shop by work and then used the bench grinder to modify the older one into a taper tap. If you look closely at taper taps and 2nd taps you’ll see that they are not specially made like that, they are plug taps that have been ground into the correct shape. You can tell this from the shape of the smaller teeth that are flat topped rather than pointed. I could not get a good photo of a my taper tap but here’s one from Model Fixings who have an excellent guide on tapping and a good range of taps, nuts and bolts for sale. 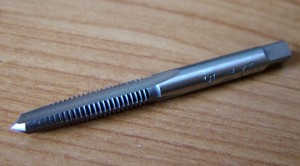 Taking the 2 or 3 tap approach rather than straight in with a plug tap makes the whole process a lot easier and you should have fewer broken taps and more straight threads.
Once I’d modified the die holder the 2BA threading of the rods was a very straight forward job.
If you are interested in BA taps and dies then Arc Euro Trade are having a sale of these items but are very quickly going out of stock. Alternatively Model Fixings can supply them or you can rumage through Ebay.