Having a acquired a classic looking valve amplifier my friend was disappointed to find that it had tacky plastic feet which were quite tall and prominant so I was commissioned to make some smaller ones from aluminium.

As with all my initial projects, sourcing the material was the first problem. I’m slowly building up stocks of metals but did not have any aluminium of the right size to do this job. Again, I turned to Ebay to provide the metal. There are actually several suppliers of Aluminium on Ebay and the one who had the right size/shape for me on this occasion was Aluminium 2 Buy who could provide a short 100mm length of 50mm diameter rod. 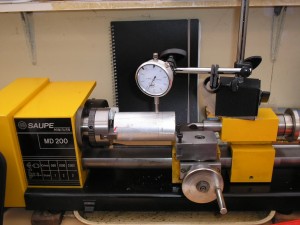 To mark out the rod, I held it in the lathe and used a clock the ensure it was square, just tapping it gently down until the clock gave a minimal reading when rotated. Following this I used a rounded end tool to mark out lines to cut the rod into discs.

Given the large diameter I did not have anything sufficient to cut the disks off on the lathe and there was a problem that the carriage would not pass under the rod. So I resorted to hacksawing these off. A few hours and one messed up disc later I decided to buy a new blade (this one had not been changed for many years). With the new blade the 4 discs were cut relatively easily. 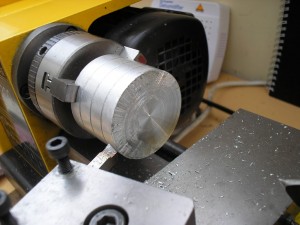 The only problem here was that the sawing was not particularly even or straight and I’d not really allowed enough tolerances to allow for that. Hence when I faced off the discs I had to remove quite a lot of metal to get a good surface. The result was that the discs ended up at 8.5mm each rather than the planned 9mm. My initial allowance was 1.7mm (approx 1.5 the blade width), in future I’d probably allow nearer to 2.5-3mm for this. Alternatively, I’ll get a longer parting off tool or build a mechanical hacksaw which would give a better results.

Apart from the issue mentioned above there was no problem facing off the material, it machined really nicely.

In a similar manner, the boring was straight forward. After centre drilling and drilling to depth with a 18mm drill (this came with the lathe with a No.1 Morse Taper on it fitting straight into the tailstock), the boring was done with a simple boring bar made from high speed steel.

The chuck jaws were swapped for the inside set and the piece was held by the freshly turned bore. The outside diameter was lightly skimmed to remove all markings and a fillet was added on the edge (as requested). Back in with the outside chuck jaws to finish off the fillet on the other edge.

The initial design was for 2 hole but as there is no rotation force on the feet this was swapped for a single M3.5 hole to allow clearance for the mounting bolt.

The feet were polished using some fine wirewool. 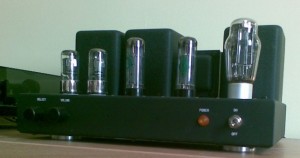 One thought on “Valve Amp Feet”