I’ve been away for a few days on the continent drinking cold beers so not much been happening in the workshop shed. However, I have started work on a small tool maker’s clamp to help with the making of the flea chariot. Unfortunately my cheap tap set has let me down again and the M3 tap failed to cut into the steel before snapping. My normal tap supplier Model Fixings is on holiday so I’m giving Uk Drills

from Wigan a try for some replacement M3 taps.

I was going to tell you about the the Wigan Pier historical museum but that appears to have closed down so instead I’ll point out the wonderful Anderton Boat Lift which was designed by Edwin Clark. 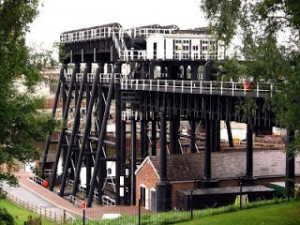 I’ve also decided that I’m going to have to make some alterations to my drill vice. I have two problems with this, the first should be simple to resolve which is that the jaw suffers from lifting and twisting when small items are clamped in the jaws. There are some tips in Model Engineers Workshop No 136 by Jim Whetren which should help in my case. The other issue is not quite so straight forward, the slots on my drill table don’t line up with the slots on the vice. The vice is a little large for the table. It’s possible I can borrow another idea from the same magazine (also by Jim Whetren) which involves cutting a groove down the side of the vice and using small clamps slot into that. I’m not quite sure how I’d cut that slot but otherwise it looks like a good solution.