Deka Research have build a small prototype hybrid electric / stirling engine car based on the chassis of an old Ford Think. 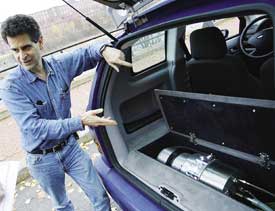 The advange of the “external combustion engine” is that it can be powered from many different fuels without the need for any conversions. Spare heat from the process can be used to heat the car and defrost the windows which are two tasks that normally have a big drain on the battery.

Dean Kamen, owner of DEKA is in discussions with Norway. The Norwegians are not shy of alternative technologies for their cars, they currently manufacture electric cars in Oslo and also import electric cars from India. They used “wood gas” for powering their cars in the 1940s when oil was scarce. However they do ban car salesmen from calling such cars “Green“.