Today I stumbled across a goldmine of information. Terry Brown’s shed stuff pages contain a large number of project he’s completed over the last 7 years. There’s a section on foundry work making furnaces and melting aluminium, this is complemented with a later section on the gingery shaper which has details of pattern making as well as casting. A section on the lathe with modifications to his 9″x20″ lathe, simple addons such as a levers and handles, mods to the compound rest, tailstock die holder, ball turning and more. A smaller section on milling machine modifications with an auxiliary table and how he made that with fly cutters. There’s some miscellaneous pages with burners, firebricks and a tiny steam engine. He finishes up with a section on his project of making the shaper. 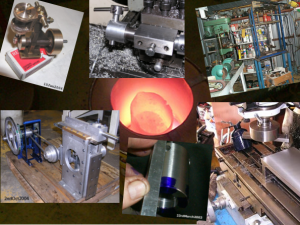 What is a metal shaper?
For those who don’t know, a shaper works a little like an electric hacksaw; it moves a tool backwards and forwards in a sawing motion cutting a slot in the metal. It’s the predecessor to the milling machine with some advantages. The first is that it can use the same tools as your lathe, the second is that it can cut shaped slots using tools ground to a particular shape, something that would require multiple operations with different tools in a milling machine. It can also cut internal keyways which is difficult with most other tools. However it has mostly been replaced by the milling the machine in workshops as it removes metal more slowly.