The idea to make a Victorian Flea Chariot came about due to my interest in Flea Circuses. I wondered if it was possible to make one using simple techniques such as would have been available in the 1800s. Although there were no details of those used in the early days of the flea circus, I had seem some in videos. Hence I based my design on those from Elsie Torp’s Danish flea circus and those seen on the British Pathe Newsreels. 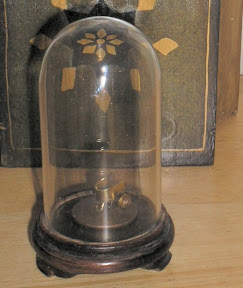 The chariot is approx 10mm long by 7mm wide and made from brass, the wheels are 5mm in diameter. The wheels and axle were turned on a lathe and the other parts were made by hand with hacksaw and files. Mostly the chariot was made without needing maginifcation but I did use a magnifying glass for the filing and fitting. A digital camera was also used to check some of the details. 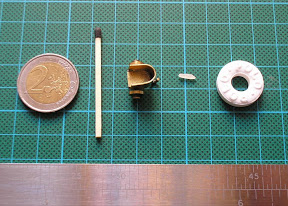 The mounting is an old victorian era french coin about the size of a 2p, the chariot is secured with a small magnet and a tiny piece of steel glued below the axle (brass is not magnetic). I picked up the glass display case on Ebay for a bargain. A new groove was turned in the base so that the dome can be removed and replaced. The carry case in the background is some fake books made from wood which I got from a junk shop many years ago.

Watch a quick demo of the flea chariot in action

It was a fairly straight forward project with a nice range of different skills including turning and brazing as well as some manual metal working. I did have some challenges when building it and more details of how it was made will be published via the workshopshed blog over the next few weeks.

Thanks go to:
William Howard school Brampton for teaching me about metal work
Dowty Group Services for training me on lathe use
Stroud College for a class on brazing skills
Eric Christoffersen from the Svenson’s Flea Circus for his tips on making chariots

Flea Circuses evolved out of the skills of watch makers and jewellers and were made famous in the 1830s by L.Bertolotto who turned the bias from the construction skills to the performance. They remained popular until the 1960s and many peoples grandparents have seen one. I’ve been researching this topic for about 4 years now and regularly make new discoveries which I publish along with other flea news on the flea circus research library blog.