So that that my furnace bits and pieces did not have to sit on the floor I decided to build a simple metal shelf. I bought some angle iron (15x20x1mm) to form two of the sides. I also used an piece of scrap which was previously part of the shelving but had been replaced as it was buckled. That piece was cut in two and the wonky bit discarded. As the two ends of the shelf were to be supported, I ensured that the side pieces rested on top of these. This means that my brazed joints are only holding the parts together and not supporting weight. I used the standard welders technique for testing the joints. I hit them with a hammer. One failed and on closer inspection it was obvious I’d not properly cleaned the metal. After a proper cleaning with wirewool the last joint was successfully made. 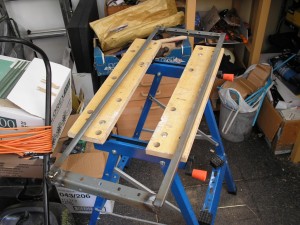 The shelf base was made from a galvanised steel cube kit cut to size. Because the metal is galvanised it would not have been possible to braze it without removing that coating. It’s also more tricky to braze thick and thin items as they can heat up un-evenly with the bigger item sapping all the heat from the smaller. As I’m a bit out of practice on this I decided on a simpler alterntative which was to attach the grids using cable ties. All was left was to bolt the shelf in place and load it up with my furnace, patterns, blower and casting flasks.