Prior to silver soldering the components I did a practice exercise to make a small brass cube. I had intended to complete all 6 sides but due to time constraints over Christmas I only completed the three sides. I will finish this off if I get some spare time. 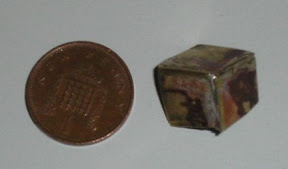 The first thing I did was to clean all of the parts using wirewool and checked that they fitted correctly.

Because there are many parts it is difficult to clamp them all in place at once. However because the parts are in close proximity it is not possible to silver solder them in multiple steps as the later steps would melt the first and the model would fall apart.

The solution to this issue is called step soldering. This requires solder with two different melting points. The higher melting point solder is used first then this is followed by a lower melting point. For complex models this can be extended to even more steps but there is a limit to how many different solders can be used. I only had one type of silver solder but I also had some soft solder so I decided to use those two. I used a cotton bud to apply flux to the joints and heated the components with a mini gas torch.

I initially used calipers to hold the parts but as the parts were heated the brass softened and it crushed the parts.

So after some swearing, bending and filing to get the axle back to it’s original shape I tried again using croc clips with a more gentle clamping force. 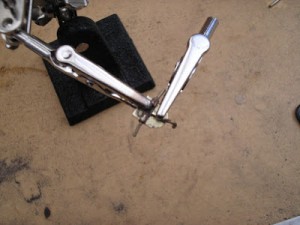 The body was then soldered using soft solder (and appropriate flux) and an electric soldering iron usually used for soldering electronic components. 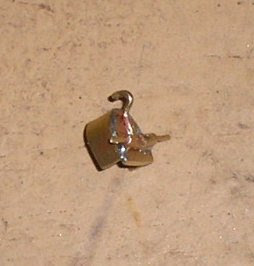 For the wheels I has originally intended to rivet them in place. Having never done this before I tried it with my test piece. That snapped so I scrapped the idea and used soft solder instead. I wetted the wheels/axle with WD40 and then fluxed the washer and tip of the axle before soldering. While the solder was cooling I checked that the wheels still rotated. I set up for the next job and gazoing! … somewhere on the floor of my workshop is a 2mm brass washer. I made another washer a soldered that onto the second wheel. 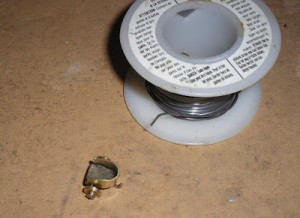 Thanks to Mike Freeman for his tips on silversoldering and cleaning flux.

The final part of this construction notes will look at the display case and carry box.

One thought on “Making the Victorian Flea Chariot – Part 3”