Following some videos and discussion of the sculptures of Sir Anthony Caro Richard Wilson, I got cracking with MIG welding my flea scuplture.
During the week I’d ground down some of the joints so I could re-weld them as double-v butt joints, this not only gives a nicer result but should be a significantly stronger joint. I added a mounting bracket for the pivot for the rear legs which left me with the challenge of welding the pivot so that it still turned. The recommendation was to use plenty of anti-spatter spray on the moving parts to stop the weld sticking. I need not have worried because unlike silver soldering, the weld does not flow into cracks and crevices unless you specifically aim it there. 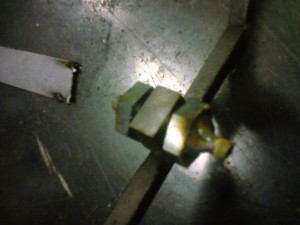 I added the top part of the back legs to the pivots and welded the front legs onto the frame. A pin was added that will support the eyes. An angle grinder was used to tidy up some of the welds and to ensure that the pivots will rotate unobstructed. 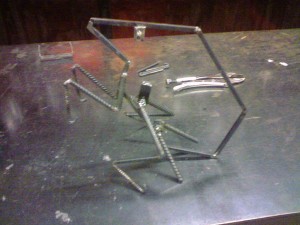 Finally I bent some welding wires to form the shape of the body, these will be attached next week along with the mouth parts and some flanges on the feet so it can be secured to a baseboard. All that will then remain is some basic metalwork to articulate the rear legs and to attach the eyes. Following the course I may add some muscle wire to animate the sculpture. 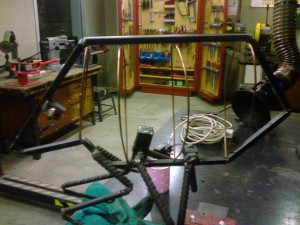