Whilst reviewing the workshopshed web logs I spotted that there are a few people who are interested in rust, rusty stuff and rusting.

Rob Skinner and Kelley Garcia, who describe themselves as “a couple of gearheads” from La Habra, California. They have a collection of engines and machinery running on gasoline, kerosene and the stirling cycle.

Michael Geltz is an artist who makes sculptures, working with wood, metal, machines, engines, electrical, welding and blacksmithing. Michael comes from a long line of practical people, his grandfather was a tool and die maker and his great grandfather was a blacksmith. 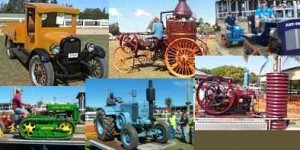 Down in Southern Australia is the Mid North Coast Machinery Restoration Club Inc., each September they run the Rusty Iron Rally. The rally allows owners of tractors, engines and models to exhibit their handywork and buy and sell new parts at the “Swap & Sell” market.

Gordon Frost SR is another metal artist who makes outdoor sculptures from weathered iron. His full size sculptures of people and animals include a fireman, giant spider and gas bottle pumpkin.