Blokey shed metal worker Vernon recently bought an Australian made Nuttall lathe and decided to fabricate a vertical slide for it so he could do milling operations in the lathe. He’s kindly shared how he went about the process of construction.

Raw materials: a mystery item purchased from ebay and steel plate 130 x 10. The two bars for the slide are a good alternative to a dovetail which is more commonly found on slides. 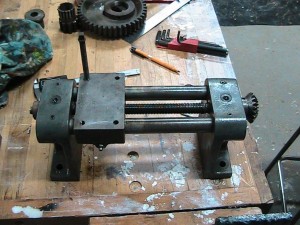 Vernon: Here is the start of the bolt I will be using to secure the slide mounting plate to the tool post bracket. This is an old gearbox input shaft, that I have previously annealed. A thread was machined onto the bolt to match that of the toolpost lever nut. Using a hole drill in base plate to provide a hole large enough to allow boring. Two holes were machined to give a choice of position. 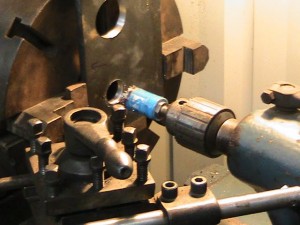 Using a boring bar to open up the hole to allow the plate to be attached to cylindrical tool post mount. A piece of plate was bolted to the slide and the vice was in turn mounted onto that. Welding up the base plate Finished slide in position on the lathe, vertical and swivelled. Many thanks again to Vernon for sharing his project with us.

Reference:
William Nuttall the maker of the Nuttall lathe.

Varmint Al took an alternative approach to his Mini lathe Milling Attachment by bolting a compound slide onto a angle plate.

Milling in the lathe by Tubal Cain

Chris Heapy’s notes on milling in the lathe.

An alternative solution to the same problem The Quick Step mill from Hemmingway Kits, a modern version of the Potts milling spindle.

One thought on “Vernon’s Vertical Slide”