J and C R Wood are the Hull based makers of the Metalcraft range of metal forming tools which includes:

Barry Wood is a current partner and son of the one of original founders Clifford Wood who established the company in 1950 and has shared with us the history of the company.

J & C.R.Wood, the company behind Metalcraft tools, began life as jobbing engineering business and was formed by Cliff Wood in 1950.

Prior to this, Cliff had left school at 15 and trained as a draughtsman for Priestman’s, a local designer and manufacturer of excavators. Ever keen to broaden his knowledge he studied engineering at night school which brought into contact with other local engineering firms where he gained a greater appreciation of manufacturing skills and equipment. 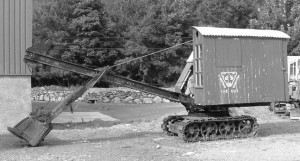 In 1950 having decided to get married, he felt that it was also a great time to pursue his ambition of working for himself and decided to set up his own engineering business operating from the garage at the rear of his father’s house in Anlaby Common on the outskirts of Hull. With a lathe, a milling machine and a gas profile cutting machine, he picked up a fair bit of jobbing work for local firms such as Deans & Light Alloys of Beverley. At that time, Deans were manufacturing many components for door mechanisms on buses and trains but also bomb carriages for the RAF. So Cliff managed to pick up a lot of the profile cutting work because as an inventor and engineer he found a way to adapt his single burner profile cutter to have more burners on and cut multiple components in the time most other businesses cut one.

Shortly, after establishing the business, he was joined by his brother Jeffrey who was a butcher by trade, but in the post war years had found business difficult just as Cliff’s was getting busy. And so the brothers decided to became business partners and J & C R Wood was formed!

Cliff and Jeff worked all the hours god sent keeping up with demand but also handling scores of new enquires from all manner of customers for projects large and small. Other work included work for the local clientele from the sharpening of lawnmowers and shears through to the making of wrought iron gates for those people who had sacrificed their metal gates and fences to the war effort.

Because of demand Cliff developed his own scroll making jigs and benders to help keep up with demand. At this point, they also employed their first apprentice – a young man straight from school by the name of Alf Simpson who was to become Cliff’s understudy and right hand man on the engineering side, whilst, Jeff worked with Cliff on developing the business and finding new customers. 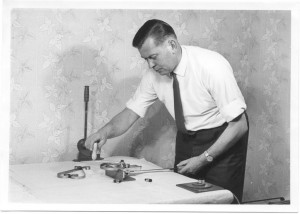 By the end of the 1950’s, the garage had been extended to accommodate more people and handle more work. Having made many gates and fences using his tried and trusted jigs and benders, Cliff was intrigued by the growing trend towards DIY and wondered how he might seize on this potential opportunity. He then thought that perhaps he could develop a very simple set of tools that would allow people to make small decorative items for the home out of light gauge wire. Thus the first Wirecraft set was born and it comprised a single scroll forming jig, which also incorporated a simple wire cutter/guillotine, plus a separate soldering iron to enable you to solder your wirework together into finished projects.

These early sets started to sell well to the public, schools, and to charities for the re-habilitation of the disabled including ex-servicemen injured during the war.

From these humble beginnings, and throughout the 1960’s Cliff continued to develop the tools to work with flat steel strip and invented additional scroll formers, as well as a bending tool, which could also roll curves and join metalwork together with cold rivets instead of soldering. These new developments suddenly unlocked new markets including new export markets in the USA and Europe. 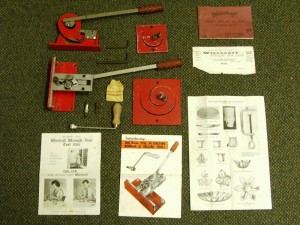 As a consequence, the garage where the business had started kept getting extended to house more machines and a larger workforce, until the mid 1970’s s when it reached the bottom of the garden! The “garage/works” then got integrated to their father’s house which, was gradually turned into offices when their father passed away.

At the end of the 1970’s, Cliff’s eldest son, Ian joined the family business as a Production Engineering graduate and whilst business plateaued in the 1980’s as the problems of recession, inflation and industrial strife affected the business.

In 1989, Jeffrey retired from the partnership, leaving Cliff as the sole owner of the business. At the same time, Cliff’s youngest son Barry joined the business having graduated as a Control Systems Engineer and worked for British Aerospace for several years.

With an injection of new blood, Ian and Barry modernised the company and became partners with Cliff in 1993. Business developed significantly in conjunction with their main European distributor. The fall of the Berlin Wall and the new markets of Eastern Europe beckoned and this ultimately, developed into markets in the Far East & China, Central & Southern America and latterly throughout Africa.

Up until Cliff’s retirement on 2000, Cliff , Ian and Alf Simpson continued to work on the development of new and bigger Metalcraft tools.

Unfortunately, Jeff passed way in 1996 and Cliff in 2005, but not before they both saw the company finally outgrow the old garage & house to a purpose built factory with modern plant and equipment dedicated to manufacturing Metalcraft tools as well as offering other products and services.

Today, Metalcraft tools are sold throughout the world and are proving as popular as ever in the UK following our major re-launch in 2009. Whether it is to the hobbyist, the DIY’ers, to education, training and re-habilitation or the commercial sector Metalcraft’s appeal is as strong as ever. Whilst we may have outgrown “grandpa’s garage” and then taken over most of “grandpa’s garden” the company re-located 15 years ago to its present location – a 20,000 sq.ft factory & office complex and now employs 30 full time staff. Nevertheless, we remain proud of our origins, which is why we keep the J & C R Wood name, and are proud to say we are still a British manufacturer.

We have a very loyal workforce and even though he has passed retirement age, Alf Simpson remains with the company today, helping us to develop the next generation of Metalcraft tools. As Alan Ross, says we are still at heart those “people who wore grey overalls with three pencils in their top left pocket” except our overalls are blue or white. Yes, the drawing boards have been replaced by CAD workstations but the draughtsman and engineering mentality are still as strong as they were in Cliff & Jeff’s day.

I’d like to thank Barry for sharing this excellent history with us and Alan Ross who’s enthusiasm over the metal craft tools lead me to J & C R Wood in the first place.