The Story behind the Models DVD

In this DVD, Ivan Law

from the SMEE interviews two of the UK’s greatest model engineers at the 2009 Sandown Exhibition, Cherry Hill and Mike Sayers. 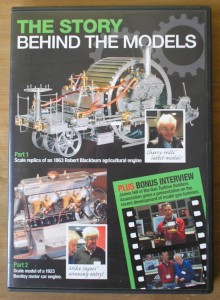 I was initially a little disappointed with this DVD as I was expecting more about how Cherry Hill built her magnificent scale model replica of an 1863 Robert Blackburn agricultural engine. Looking on the forums it would appear that Cherry is a difficult person to interview and is not always forthcoming. However the 15 minute interview does give a very detailed look at the engine and some of the history behind how it was designed and constructed.

The second interview with Mike Sayers is slightly longer at 20 minutes. He describes his model of a 1923 Bentley car engine. This is a working 1/3 scale model of the fullsized engine. Mike describes the parts and the detail is amazing although he can be a little repetative.

It’s obvious that the camera man was more interested in the models than the people as many shots show the model with a headless body in the background. I initially found this a little strange but it does mean that you get to see the models in a lot more detail than you would with a wider shot.

The special bonus feature is a presentation by James Hill, chairman of the Gas Turbine Builders Association who talks about the recent development of model gas turbine engines. At 35 minutes it’s the same length as the other two interviews put together. James is a excellent presenter and having never heard about gas turbines before I found the whole section facinating and for me this made up for the shortness of the other two sections.

You can buy the DVD from the my hobby store, if you’ve never bought from them before then you can use the following referal code for 5% off your first order.

The Story behind the Models DVD