Although I don’t have a kindle yet, I do have the software on my phone and laptop. One of the books that appeared in the free downloads was “James Nasmyth engineer; an autobiography”, obviously I had to download that and find out more. Before I get into the detail of the book, one thing that is a problem with this free version is that there are no images, however there is a full version online at the internet archive

Before reading the book I knew nothing of Nasmyth. I did not pay too much attention to history classes but I’m fairly sure he was not on the pre-GCSE sylabus, if there is anyone reading from my old school (William Howard) then feel free to put me straight if he was covered. 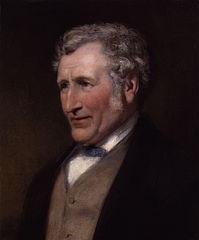 James was born at No, 47 York Place, Edinburgh to a well off family. His father had already shown great talent in his painting and engineering so James came from good stock. He had good schooling but really excelled in drawing, making and repairing things. In his youth he made models of steam engines that he sold and showed good business sense as well as technical skills.

It was these technical skills that got him an apprentice ship with Henry Maudslay and from there he developed his skills further and worked well with Maudslay. After Maudslay’s death he went on to set up his own business. One interesting interlude was a “walking holiday” where he visited the industry in the north of england then over several days walked back from Birmingham to London (via Oxford). 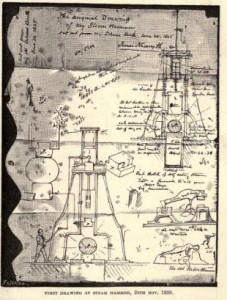 It was whilst he had his own business that Naysmyth invented the steam hammer that he is most famous for but there were also many other contributions to casting and forging. In later life he married and also travelled Europe and ensured he kept up to speed with what was happening in his industry. The book finishes with a long list of his inventions, so I’m sure Nasmyth will be appearing in this blog again as I investigate some of those in more detail. 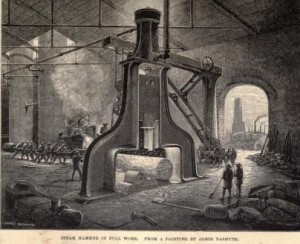 Even without images, I found the book most facinating and even inspiring and would recommend it to anyone wanting to know about engineering history or even just wanting a good read. There are many reprints of this book, and lots are also without pictures so you need to be careful if buying a copy online if you want the full edition.

One thought on “James Nasmyth an Autobiography”