In London over the last few years there has been quite a lot of construction work. There are many new buildings being built but also quite a few where they keep the facade and build a new shell.

I can understand why this is after working for a few years in an old town house. The flooring on the top floor sloped towards the middle of the room. We had to remove the feet from the back of the drawers so that they would not slide open by them selves. The desks all had to face the middle so that people would not roll away from their desks.

To be able to keep a whole wall without the building to support it needs some impressive fabrication work. Basically they bolt together massive RSJs in a box frame which is in turn bolted through the wall that they are supporting.

These are a couple of examples from Mayfair and from the site of the former Middlesex Hospital site in Fitzrovia. 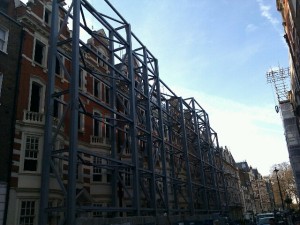 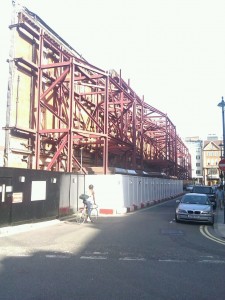