iMakr – The Opening of a 3D Printing Store in London

Today I joined 300 other makers, designers and tech enthusiasts at the opening of iMakr. In fact the opening has proved so popular that it has been spread over 2 days so that more people can attend.

The store describes itself as a “Total 3D Experience” and stocks a range of both 3D printers and 3D scanners as well as a selection of other accessories and software. IMakr plan to host events and demonstrations to allow you to learn and understand about this technology.

We had a bit of a slow start and quite a crowd built up on the pavement outside. I met a few interesting people in the crowd including printer builders, new startups and the people from Printcraft who link up to the big 3D printing services APIs to get your models printed. 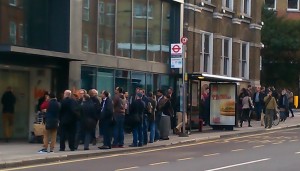 Whilst we were waiting canopes were served on the pavement which was a little sureal. Eventually Sylvain Preumont arrived and gave us an introduction to some of the special guests such as Adrian Bowyer, the inventor of the RepRap and Sam Cervantes the CEO and founder of Solidoodle unfortunately I missed most of what he was saying over the noise of the crowd. 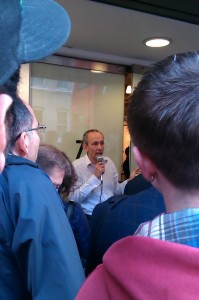 The entrance hall is also a showroom and demo space surrounding the stairs that lead to the lower floor. Above the stairs is a wonderful piece of 3D printed sculpture. Around the entrance hall were demos of several machines and a stall from iMaterialise explaining their services. 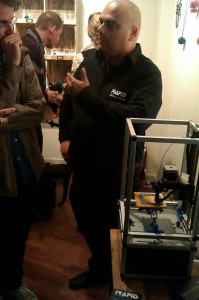 Also next to the entrance is a spendid brick version of the IMakr logo which formed a backdrop to some of the speakers. On the lower floor were yet more examples of different printers along with some 3D scanners and people who make things in 3D. Down here I also bumped into Richard Gain a puzzle maker and 3D printer owner who had printed me a flywheel pattern for casting just a few weeks before and not surprisingly we chatted about casting, puzzle making and 3D printing.

Scattered around the walls of the shop were a series of boxes containing examples of 3D printed items and artwork. 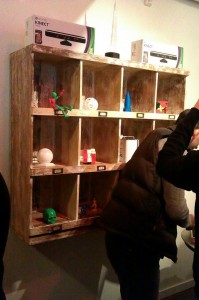 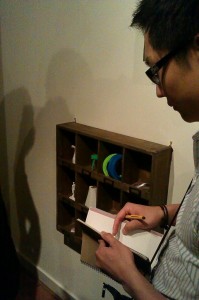 There were many examples of 3D printers and several of them were being demonstrated. Some of the people attending were overwelmed by the selection but this is kind of the point of the store which is to help people decide which printer to buy or if they want to get a service to do their printing instead. The store is quite large but with 300 people it did get a bit crowded at times. 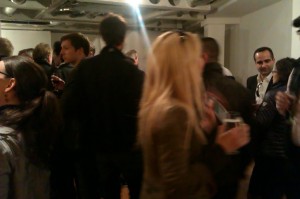 Along with the printers were a few scanners and there was quite a queue of people waiting to have their heads 3D scanned. One interesting item I’d not seen before was a 3D mouse which was coupled to the Anarkik3D software. This was particularly interesting as it had resistance feedback so you could feel the materials you were interacting with on the screen. 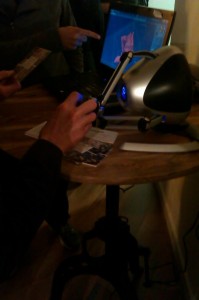 A very interesting place and a most enjoyable evening, a big thanks to everyone who had a part in the opening and the people I met.

The iMakr store will open from Thursday and can be found at 79 Clerkenwell road EC1R 5AR, London. Demos and other events will be running from next month.