As part of my investigation into alternative solutions for my digital rotary table I thought I’d have a look at the AS5048B a clever little chip with 4 hall effect magnetic sensors and some digital signal processing. This allows it to detect the orientation of a diametrically magnetised magnet to 0.1°. This “B” version of the chip also has an I2C interface so I can communicate with it using my Arduino. 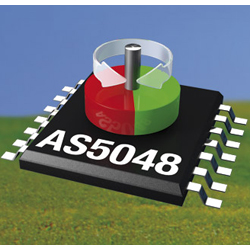 When the chips arrived I realised they were rather tiny 14 pin TSOP chip, at just 6mm by 4mm. So I purchased a SSOP to DIP adapter PCB from Proto-Pic, some flux, and a 0.5mm soldering iron bit from Phenoptics. 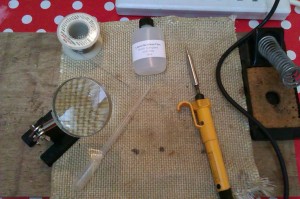 I made sure I had lots of light, some magnification and some fine solder. The board was mounted in a small vice and I added the tiniest amount of flux to each set of pins. The chip was positioned using some tweezers. 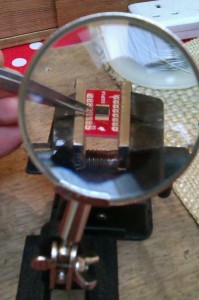 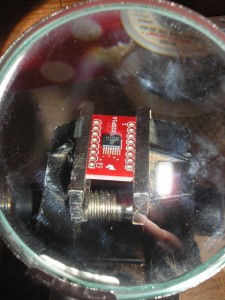 To solder, I put the tiniest amount of solder on the iron then wiped most of it off again. The iron was placed on the first pin and it sucked in the solder. 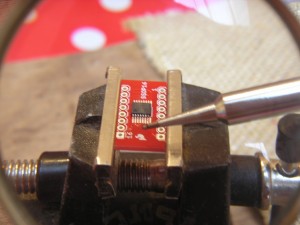 The board was rotated 180° and the process was repeated. 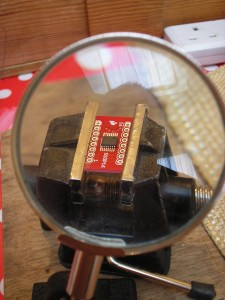 I had a bit of difficultly with the second corner in that I managed to blob solder over the first two pins. I used some desolder braid to remove that and then soldered the rest of the pins with a dragging motion away from the pins. This seems to have worked, I’ve zoomed in on the pictures and can’t see any problems. I’ll need to wire up a basic circuit and build a magnet test rig to be able to check it out in more detail. 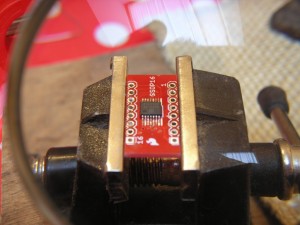 I wired this up to my Arduino and ran a simple I2C bus scanner application. It did not detect my chip. I did some checks with the multi-meter and concluded that the SDA line was not connected. Unfortunately whilst trying to correct this I managed to snap the leg off the chip. So that’s 1 down and 2 to go. I’ll need to get another circuit board for this.