The grout is strong in that one

If you have been following my twitter feed you will know I have been renovating my shower room after we found, just before Christmas that the floor was rotten.

I took the tiles off the cubicle and the cause of the problem was obvious, multiple leaks through the tiles onto the unprotected plywood behind. 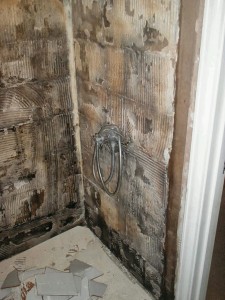 I took the ply off and re-enforced the worst affected wall support.

When I was removing tiles on the wall where the tiles met the cubicle some of the “good” tiles got broken. So I thought I would share what I learnt whilst removing those. 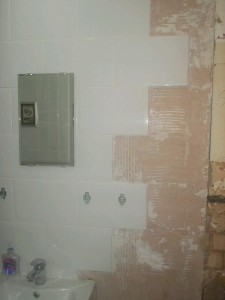 Firstly, even if you score them you can’t determine where the tiles will break.
As the title suggests, the grout can be surprisingly strong and lifting one tile can lift and hence snap another. So you need to chip the grout out using a grout rake. I found that this worked better with regular rinsing under a tap. I also found that an old wallpaper scraper could be used to remove the grout. This also helped in loosening the adhesive behind the tiles. Be prepared for a lot of dust from this process and allow time for patching up the wall.
I was told to try breaking the tile in advance with a hammer but all that seemed to do was cause more damage to the wall.
I managed to break a bit of the plasterboard behind the toilet as it had lots of holes cut in it and was floating over a gap in the wall behind so my next little job is to patch that up before the tilers come in next week to start putting the room back together.
The plan for the shower cubicle walls is waterproof cement based backer boards which should make for a more reliable substrate. Rather than having a tiled stub wall, a longer glass shower door will be used which also has a bonus of letting more light into the shower.

One thought on “The grout is strong in that one”