Like any normal clock, the topsy turvey clocks requires two concentric spindles. The original spindle sizes were 1.6mm and 3.3mm to fit the hands. The size needed for the gear wheels I purchased was 4mm. The lengths need to be determined based on layout of the clock and gears but will be approx. 30mm, my plan is to make them overlength and then bring to size once other factors are finalised. 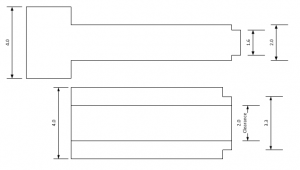 I considered a couple of options, I could stick with original sizes or could switch to a 4mm and 2mm shaft and then turn the ends down to fit the hands.

For the first option I could create a D Bit to ream the hole to fit the spindle.
However the second option means I can use a standard drill bit and machine the thinner spindle to match the hole. So I decided that was a better option. I also needed to consider the pivot size where the inner spindle is supported on the frame and how to mount the gear wheels too.

The original shafts were made of different materials, I’ve heard this gives for better long term reliability so decided to do the same. After checking my material stocks, I had 5mm brass and 4mm steel round rod. I also had a selection of 2.3mm drills so my inner spindle will need to be a little larger than 2mm to give a good fit.

I tried turning the brass down to 4mm and had poor results even though I’d tried to support it with a female centre. The rod had flexed and I’d ended up with a bulge in the middle so it was 4mm at one end, 4.3mm in the middle and 4.1mm at the other end. I also tried drilling a hole, this started badly with the bit having an oscillation. I thought the drill had made it all the way through but when I removed it from the chuck I discovered that the drill bit had broken and passed through the side of the rod.

After doing a bit of reading I tried again with a couple of changes. Firstly I upped the lathe speed by changing the belts to 2000rpm, I also used a diamond stone to remove the sharp corners of the drill bit, this reduces the chance it will grab into the metal.

Leaving the turning of the rod till after drilling mean there would be less wasted time if it went wrong again. I peck drilled the hole making sure the flutes were clean of swarf before each operation. This got particularly important when I got to the point where there were no flutes showing outside the hole. I drilled a little and fully retracted to clear the swarf, making a note of how much was generated so I could control how deep to drill each “peck”. This eventually got to a point beyond the movement of my tailstock so I had to unlock and slide it back to fully retract. With a bit of perseverance I eventually made it through the rod and when I removed it from the chuck, I confirmed that it was pretty much central on the other end. 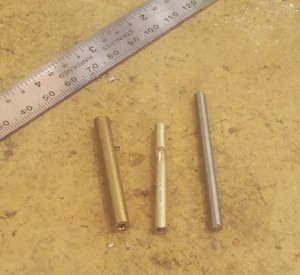 The next job is to turn the outer diameters so that the steel smoothly rotates inside the brass rod and so that the hands push fit on the ends.