Both the axle and the wheels of the chariot needed to be machined. However due to a lack of appropriately sized material, I also ended up machining the hook at the front of the chariot.

To turn the 4mm brass rod down to 2mm for the axle, I needed to support the rod at both ends to stop it bending when being cut. I did this using a female centre to support the tailstock end of the rod. Once this was complete, the ends were sawn off and the axle were carefully machined down to 1mm. 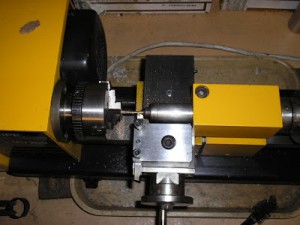 I also created a small test piece shown in the top of the picture below to practice attaching the wheels. More on that in part 3. 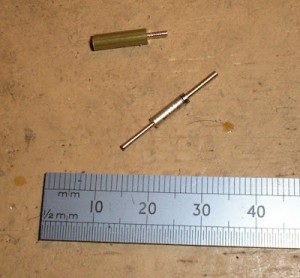 For the towing hook of the chariot the rod needed to be even thinner, I wanted it to be 1.5mm. This used the same technique as above. However the rod was bending as it was machined meaning that the middle was fatter than the ends which were supported. The solution to this was to run more passes with a finer feed. Keeping the tool clear of swarf (dust) and additional cutting fluid seemed to help with this too.

Both wheels were machined at the same time using a small parting tool. 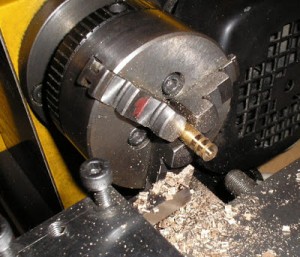 The holes in the wheels were first spotted with a very small centre drill and then drilled to 1.2mm to give clearance on the axle. Because the drill was so small I needed to use a small drill chuck mounted in the larger chuck of the tailstock. 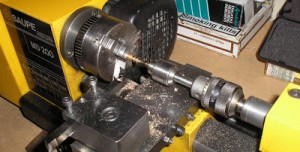 Thanks to the chaps from the Model Engineering Clearing House for their tips on drilling with very small drills. 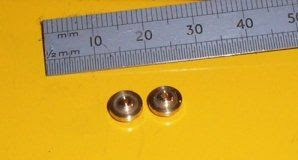 The wheels were separated with a junior hacksaw and then filed smooth.

An offcut from the axle was also used to make the washers that held on the wheels. These were thinned/smoothed by rubbing them on some emery cloth. You can see them in the middle pot of the photo of the parts box below.

The base of the chariot sawn from a piece of brass strip and rounded with a file. Then using a magnifying glass and a needle file, the stepped edge was added. The front of the chariot was made from a slightly thinner brass strip and filed to shape. I had wondered about using some kind of tool for bending this to shape but it turned out that it could easily be done by hand. I simply bent the strip around the base of the chariot. A photo with the digital camera showed where it did not fit properly and it was coaxed into line with a bit of rubbing. 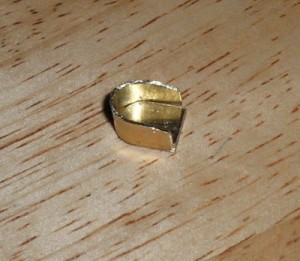 Because the parts were so small I kept them in a plastic container to avoid loosing them and helping when I came to pick them up. 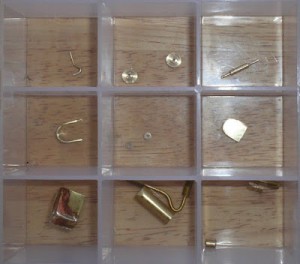 In the next part of these build notes, I’ll be covering the issues with brazing and soldering the components together.