When I saw the posters for this exhibit I knew I had to go and see it. 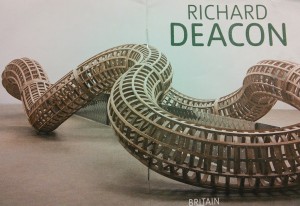 Like the fliers these posters feature a work called “After” in wood and metal which fills one of the later rooms of the exhibit. The posters don’t really do it justice and you have to walk around it and see the detailing of the joints and stainless steel combined with the wood to fully appreciate it.

There are 6 rooms in the exhibit with a handful of sculptures in each room. Some of the first works such as “Untitled 1981” are in laminated wood, I thought the construction was quite rough with the glue oozing out of the seams. However if you take a few steps back then the piece shows off it’s elegant curves. All the works are like this having different views and detail from close up or far away. I also noticed an obsession with self tapping screws which were used in a lot of the sculptures.

My favourites were in the last room. Out of order is steam bent and blacken wood with metal joining plates. I like the fact that the blackening was not intentional but a side effect of the experimental process of creation.

At £11 it’s quite expensive for a small exhibit but as it had been a long time since I’d been to Tate Britain I took the opportunity to see some of the other sculptures such as the Henry Moore, Barbara Hepworth and Anthony Caro. This meant that I felt like I got better value for money. If you can’t afford a trip then a you can see a lot of the sculptures online but as mentioned above you will get more from being able to see these from all angles and perspectives.