The Topsy Turvy clock is not my first clock project, however it is my most complex.

When I was younger, I made three other clocks, these all used purchased clock modules with a custom face. The first was made for my Aunt who liked languages. It was circular with a white Perspex face and simple hands. The numbers were hand painted in Japanese Kanji. I’d attached the face in a drill and used wet and dry paper to smooth the outer rim.

The second I made for a friend whilst I was living in Cheltenham. It used a round wooden chopping board as it’s face with chopped up dice inlayed for the numbers. I’d used a cheap donor clock for the mechanism and was later told that it had needed to be replaced. However the owner was otherwise very happy with the present.

The last clock I made for myself, I think it was supposed to be some kind of teenage commentary about not having control of your own time. The surrounding “door” was made from pine slats stained dark and glued together. The grill was brass bars with cardboard trim. The clock face had no numbers and was white Perspex velcroed to the back of the door. The clock hands had to be cut short to fit in the space and the door handle was made from a paper clip. 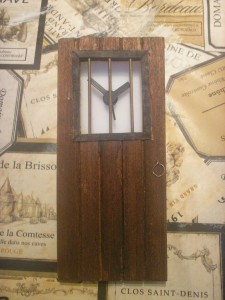